If you read our earlier post, you’ll know that today there’s some interesting action going on at ESA’s ESOC operations centre in Darmstadt, Germany, where teams are reacting to a forecast conjunction between a piece of space debris and ESA’s Swarm-B satellite. Here’s the latest! 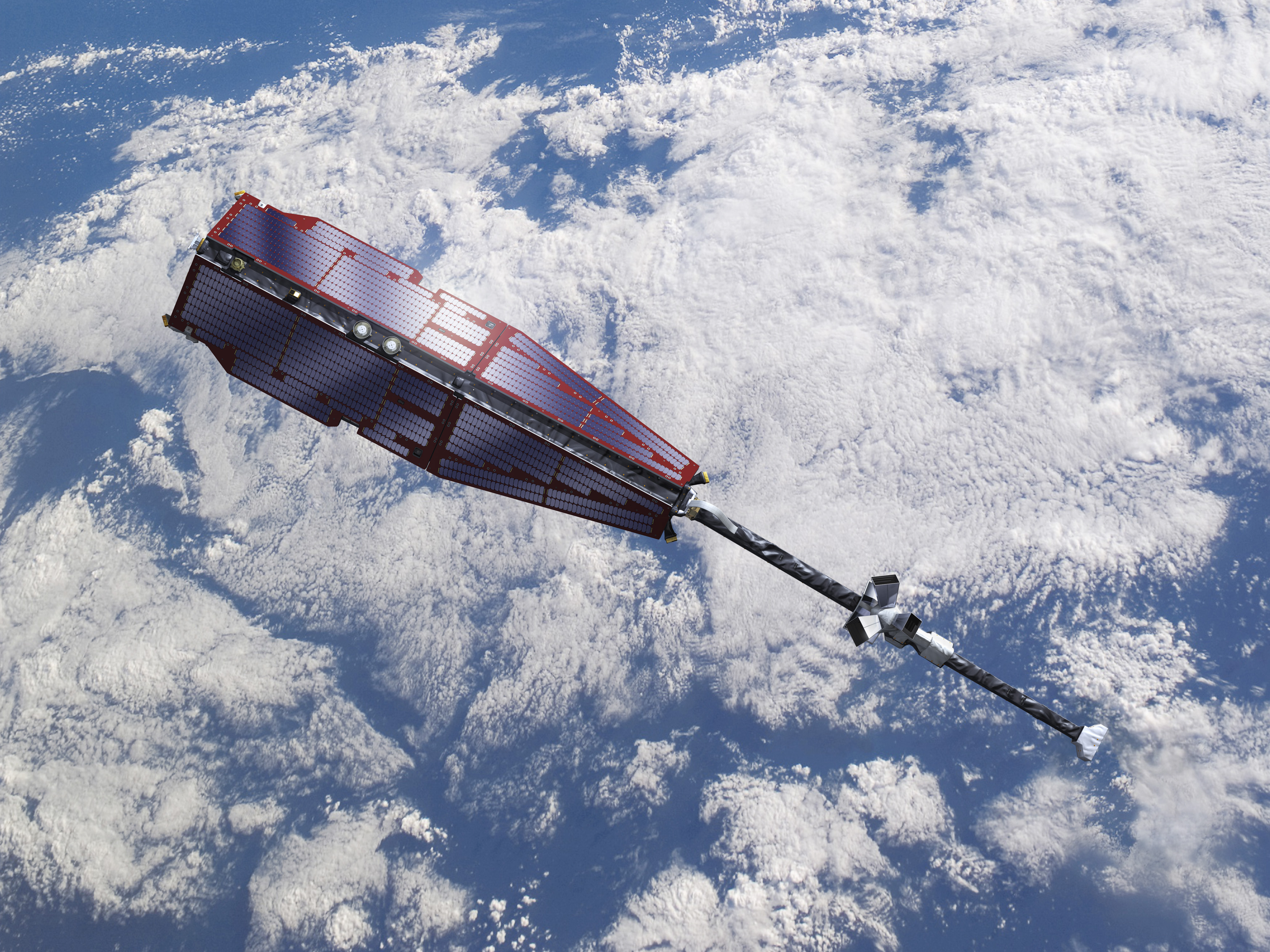 The current alert began following an initial report received a few days ago by ESA’s Space Debris Office from the US armed forces’ Joint Space Operations Center (JSpOC) located at Vandenberg Air Force base in California.

JSpOC receive data from the American space surveillance radars and telescopes and through a long-standing data sharing arrangement, which provide ESA with data whenever a conjunction involving one of our missions appears possible.

The object in question is a piece of debris from the old Cosmos 375 mission; it is thought to be about 15 cm in diameter and it presents a cross-section of about 10-15 cm2. It is well tracked and its orbit is known with fairly high precision. Nonetheless, there’s always some uncertainty in this, as there is in anything that is orbiting.

Initially, the debris team at ESOC monitored the evolution of the prediction for a few days to assess the risk, and to assess whether the object would – at the time of closest approach – violate the 1/10,000 risk threshold set by the Swarm mission managers at ESA.

Before we go further, it’s important to understand what this means.

Essentially, if a specific conjunction event is predicted to occur while exceeding a one-in-ten-thousand risk, then it is likely that a debris avoidance manoeuvre will be recommended to the mission manager, in effect suggesting that the spacecraft should be moved out of the object’s path.

“The acceptable risk threshold is set by the mission based on analysis with a statistical reference population of space debris objects. We use our DRAMA software for such analysis at the Space Debris Office. For operational support for flying misisons, we just implement our recommendation based on the agreed process,” says Tim Flohrer, this week’s on-duty debris analyst.

“Today, one in ten-thousand per event is a common risk level used for ESA missions, as it is for many other mission operators.”

Tim explains a few of the factors taken into account when the Space Debris team at ESOC calculate the risk of conjunction. These include:

It’s also worth noting that there are some important geometric numbers when assessing a possible conjunction: how close an object might pass, given in metres, with respect to the operating satellite’s flight direction; positive values refer to the debris passing in front of the satellite and negative, behind. This is also referred to an ‘along-track’ conjunction.

The second is how close an object will pass, given in metres, with respect to the operating satellite’s trajectory in the direction away from Earth (typically, up or down); positive values refer to the debris passing above the satellite and negative, below. This is also referred to as a ‘radial’ conjunction.

The third component, the cross-track separation, completes a set of three numbers to describe the separation distance

This morning at 09:00 CET, on the advice of the Space Debris Office, Swarm Spacecraft Operations Manager Frank-Jürgen Diekmann called the first meeting to assess the situation, make a recommendation to the mission manager, Rune Floberghagen at ESRIN, and devise an initial plan for conducting a possible manoeuvre to boost Swarm-B out of the way.

The meeting included the flight control team, in particular the engineers dedicated to the Swarm-B attitude and orientation control system (i.e. its on-board propulsion system) and science instruments, a flight dynamics representative and the space debris team.

After reviewing all facts known so far, it was determined that the best way to reduce the risk is to boost the spacecraft higher in its orbit.

A thruster burn that delivers a ‘delta-v’ (change in velocity) of about 7 to 8 mm/second to lift the craft higher would be fine; this will provide an additional ‘height’ of 30m and reduce the risk back below 1 in 10,000.

This would also have very little effect on the mission’s prime science mission (remember: all the Swarm craft must orbit in a certain relation to each other), and will use only about 10g of precious fuel.

After some detailed discussion of alternative options, it was determined that an even a slightly higher boost of 10 mm/second could be considered. The craft must conduct a slew (reorienting itself in space) both before and after the avoidance manoeuvre, and these, too, will burn fuel – about 30g each.

“So, if we’re using fuel to conduct the necessary slews, why not go a modest bit higher with the burn, which hopefully precludes any future issues with respect to this particular piece of debris,” says Frank.

In the end a manoeuvre plan was recommended to the mission manager, who readily accepted.

However, the manoeuvre will be confirmed based on additional newer information from JSpOC, expected later today or early tomorrow and providing an even better estimate of the debris object’s track. The ESA GO/NOGO will be taken if the updated information continues to indicate that a conjunction is likely.

“This plan is a good one and, if we have to do the avoidance burn, it will have the primary result of ensuring spacecraft safety now and providing some good margin against a possible future encounter with this debris object,” says Rune.

It’s important to note that the team are working under a time constraint.

To upload commands to the spacecraft to conduct the manoeuvre, there has to be a tracking station slot.

Between now and the predicted conjunction time tomorrow at 23:10 UTC, there are only two slots scheduled: one at 07:51 UTC tomorrow, and another at 11:02 UTC (each pass lasts about 12 minutes). Both will run via ESA’s Kiruna station.

After assessment of this constraint, it was decided that the ‘command stack’ – the commands that will automatically command the craft to conduct the burn even when out of contact with ground – will be uplinked tomorrow during the 07:51 UTC slot, leaving the final decision to disable them (if manoeuver proves to be unnecessary) to be taken in time for the 11:02 UTC pass.

Immediately after the meeting, the flight dynamics representative for Swarm-B, Detlef Sieg, began formulating the detailed manoeuvre plan that would provide the needed thrust.

Simultaneously, the flight control team are getting ready to uplink the commands and ensure that the rest of the craft is prepared for conducting an unscheduled burn.