Behind the scenes at a rocket launch

As the old saying goes, It takes a village… or, rather, it takes an extended network of expert teams on multiple continents to launch a rocket! ESA and industrial support teams were out supporting the Arienspace launch of Soyuz VS15 on 24 May, which took place as scheduled at 10:48 CEST, lifting Europe’s Galileo satellites Nos. 13 & 14 into orbit. The two satellites are doing very well, and were taken under control by the joint ESA/CNES mission control team at ESOC, now working around the clock for the critical ‘LEOP’ (launch and early orbit phase) until about 1 June.

ESA’s 5.5m station on the Portuguese island of Santa Maria, in the Azores some 1500 km from Lisbon, was the first Estrack station to acquire signals, followed, later, by ESA’s 4.5m and 35m antennas located at New Norcia, Western Australia. Both stations tracked Soyuz, downlinking telemetry (on-board status info), and passing the information back to CNES at Kourou.

The first report came in yesterday from ESA’s Gerhard Billig, from our Estrack team at ESOC, Darmstadt, who wrote just prior to lift-off:

ESA and industrial support team at Estrack Santa Maria tracking station – way out in the Atlantic – ready to acquire and downlink signals from Soyuz VS15 on 24 May 2016 starting shortly after launch! Weather fine, but a tad breezy… ‪#‎Galileo‬ Image: ESA

The countdown took the whole night, now the Sun has come up and we have a beautiful, although windy morning. All systems checked, waiting for the liftoff!

And, about 90 mins after launch:

Tracking the Soyuz launcher this morning was quite un-spectacular in the end, everything went very nominal. Although it is a thrill every time you see the launcher is approaching, it never becomes routine.

Next, this morning, this report was sent in by ESA’s Luca Foiadelli, also from our Estrack team at ESOC:

The New Norcia station served as part of the CNES launcher tracking network, and we followed the Soyuz network countdown 10 hours before the lift-off, which took place as planned at 08:48:43 GMT (10:48:43 CEST). New Norcia acquired signals from the Soyuz’s Fregat upper stage at 09:34:22 GMT (11:34:22 CEST) using the new 4.5m acquisition antenna NNo2 and after 3 minutes handed over tracking duty to New Norcia’s large, 35m deep-space antenna NNO1. The track was continued for 6 hours and 40 minutes until Fregat activities were declared complete. During the support, we were able to monitor as well the two Galileo downlink transmitters being switched ON (using a spectrum analyser).

Congratulations on a job well done to everyone involved in this activity! 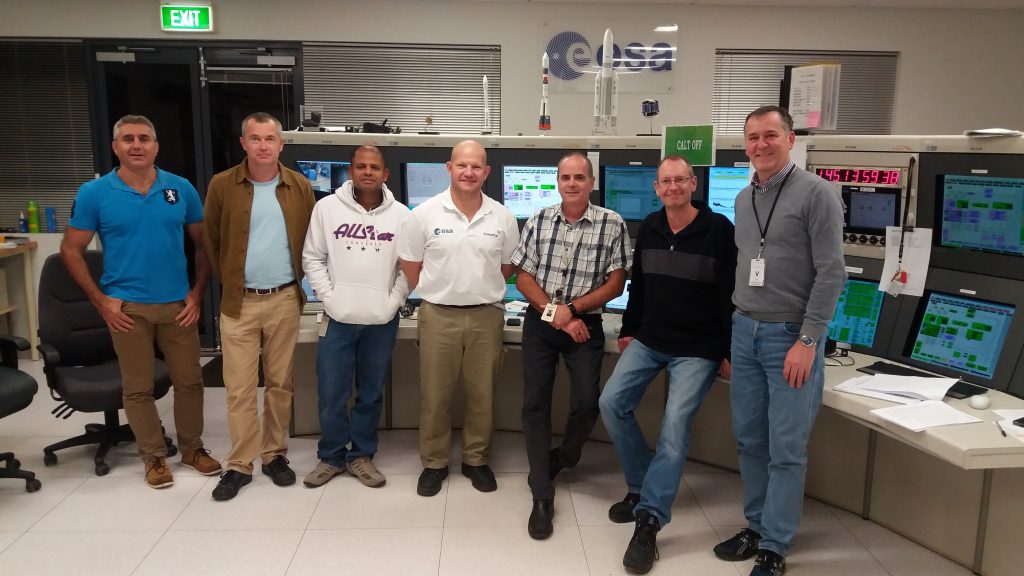 Engineering team from ESOC and Inmarsat working at ESA’s New Norcia tracking station in support of the launch of Soyuz flight VS15 on 24 May 2016. Credit: ESA/Inmarsat Solutions B.V.