On 29 April 2016, ESA astronaut Tim Peake controlled, from the International Space Station, a rover nicknamed Bridget at Airbus Defence and Space in Stevenage as part of an international experiment to prepare for human–robotic missions to the Moon, Mars and beyond. Building on previous test campaigns in the ESA-led Meteron project, the experiment saw ESA, the UK Space Agency and Airbus Defence and Space working together to investigate distributed control of robots in a mock-Mars environment (full text). 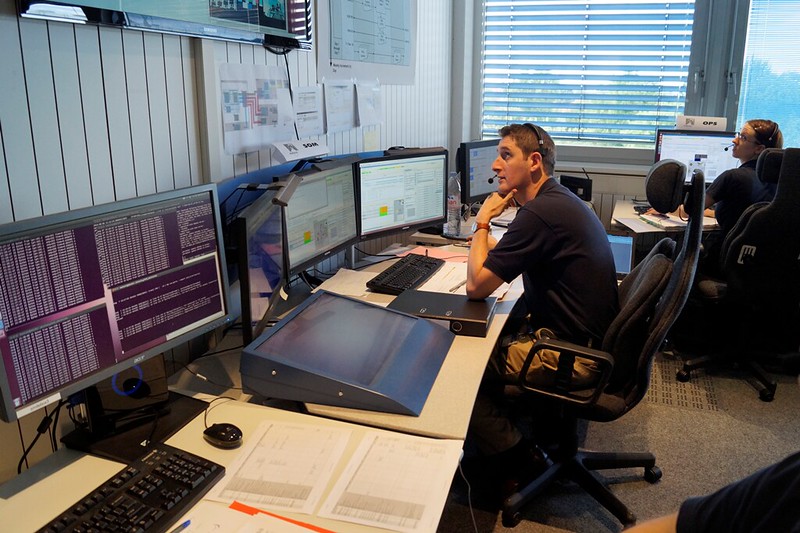 Following the successful rover-driving experiment on 29 April, we asked ESA’s Kim Nergaard, ground segment manager for Meteron at ESOC, for a brief ‘after-action’ report. Here’s what he sent:

Two of the primary objectives from the 29 April rover-driving experiment (dubbed ‘SUPVIS-M’) were crew driving of a rover in low-light conditions and end-to-end operation of a human-rover system with handover of control between operators.

The aim of the crew experiment was not to ensure that Timothy Peake would drive the rover flawlessly around the Mars Yard in Stevenage, but rather to collect information on how his ‘situational awareness’ was impacted by the limited information available to him and to get metrics on how the different centres performed under such stressful conditions.

These objectives were fully met during Tim’s activity last week. The operations team at ESOC, led by Paul Steele, the Meteron System Operations Manager, was responsible for the overall coordination of the experiment. Throughout the experiment day, the team here worked closely with our partners in Airbus UK and Belgium’s ISS User Support and Operations Centre. The team at ESOC have gained valuable experience in this type of operations over the past years, having also operated the Meteron Opscom-1 and Opscom-2 experiments, not to mention benefiting from the overall mission operations expertise in ESOC.

Meteron stands for “Multi-Purpose End-To-End Rover Operations Network” and the SUPVIS-M experiment satisfied each word in that acronym. ESOC used generic multi-purpose infrastructure systems for ground and rover monitoring and control, a complete end-to-end scenario was in operation (multiple ground teams, crew and rover), rover operations were the main focus and the whole system was based on a network architecture using the Disruption Tolerant Network (DTN) protocol. DTN is very useful for this type of complex system as allows us to implement an IP-like network considering the non IP-friendly environment of space, with its long distances causing delays and disruptions due to loss-of-signal etc.

We have collected most of the data from the experiment already and once all of it is in place the engineers will analyse the data and prepare the outputs. These will be used when preparing for future human and/or robotic missions to other destinations, in particular the Moon and Mars.

We also picked up a quote from ESA’s David Parker, Director of Human Spaceflight and Robotic Exploration, who said:

“This experiment further proves we can operate rovers while orbiting a planet, another significant step in our vision to send astronauts and robots together to explore our Solar System.”

“Our investments over the last years in human spaceflight and robotic exploration has showed concrete achievement today and prepared the way for our future ambitions to the Moon and beyond.”