The speed with which we get to Mars

(UPDATED 1.04) Scroll down to the bottom of the post for the final review of responses.

(UPDATED 24.03) We got a query earlier this week via Facebook from a past participant (thanks, Massimiliano!) in one of our SocialSpace events (the Astro Luca Tweetup in 2014).

His question related to ExoMars, and – we have to admit – it was a bit of a stumper! But even if we on the ESA SocMed team didn’t know the answer, we knew who would: the flight dynamics wizards at ESOC!

No ESA satellite reaches its destination without the ‘spacecraft navigators’ – the flight dynamics experts who predict and determine trajectories, prepare orbit manoeuvres and determine satellite attitudes and pointing (read more).

So we passed the query over to Frank Budnik, who is part of the ‘FDyn’ team supporting ExoMars, and asked him to reply, which he has done.

Now, BEFORE we post the answer, first read the question and see if you can answer it without reading Frank’s reply. 🙂

Hey Daniel, may I bother you with another question? On the ESA website I have read that the entire cruise of ExoMars is 500 million km in 218 days… that means it goes at a speed of 95,500 km/h! How is it possible? The actual record of speed is New Horizon’s, almost 56,000 km/h…

What do you think?

Next week, we’ll post Frank’s reply, and whoever has posted an answer that most closely matches his gets an ESA tee-shirt.

Cheers and have a great weekend!

Wow! Thank you for the large number of very well thought-out, well-reasoned and imaginative answers posted below. This query unexpectedly caught a lot of people’s attention and we were really delighted to see the range and extent of replies submitted. Our answer to the query above is in several parts.

First, before we get to Frank’s reply, take a moment to read the excellent description of orbital mechanics contributed by ESA mission analyst Michael Khan as a reply to a query from Yasmin Tayag in New York (though, like this post’s editor, she’s originally from Toronto! – Ed.), who blogs over at Invserse.com. Here are some pertinent quotes, although her entire post is worth reading:

An interplanetary transfer from the Earth to another planet (in this case, Mars) is not a matter of flying on a straight line with a given cruising speed like an aircraft would on the Earth, or like a ship that cruises through the ocean, with some changes in direction at given waypoints. That’s not the way it works in the solar system.

Now, on the elliptical transfer, the spacecraft it climbing away from the Sun towards the Mars orbit, and the Sun is holding on to to the spacecraft with its gravity. So as ExoMars is climbing, its height energy increases. Therefore, the motion energy must decrease. The total energy stays the same. So on its flight to Mars, ExoMars continuously gets slower and slower.

The most important thing you see is that the ExoMars trajectory, like all trajectories in space, is distinctly curved. There are no straight lines in space. Once you have bodies that have mass, such as stars and planets, you have gravity, and in the presence of gravity, everything will fly on curves. Curves are natural, straight lines are not. The distance covered following the curved red line from Earth to Mars is about 500 million kilometres, to put that into perspective. Half a billion kilometres.

These are just a couple highlight extracts – do read the entire post!

Now to continue with our explanation, take a look at the chart below, which Frank sent over just prior to lift off.

This shows the same thing that the YouTube animation at the top of this post shows, and that Michael’s reply to the US blogger mentioned: ExoMars/TGO follows a curved elliptical path between Earth and Mars, and this distance amounts to, roughly, 500 000 000 km.

The chart shows this as a linear function of accumulated heliocentric distance (that is, distance travelled with respect to the Sun) covered with respect to time (while the YouTube animation shows the same path with respect to space). On 14 March, launch day, the total distance covered is 0. By early June, it will be 200 000 000 km; by early September 400 000 00 km and by arrival day, 19 October, just a tad under 500 000 000 km. 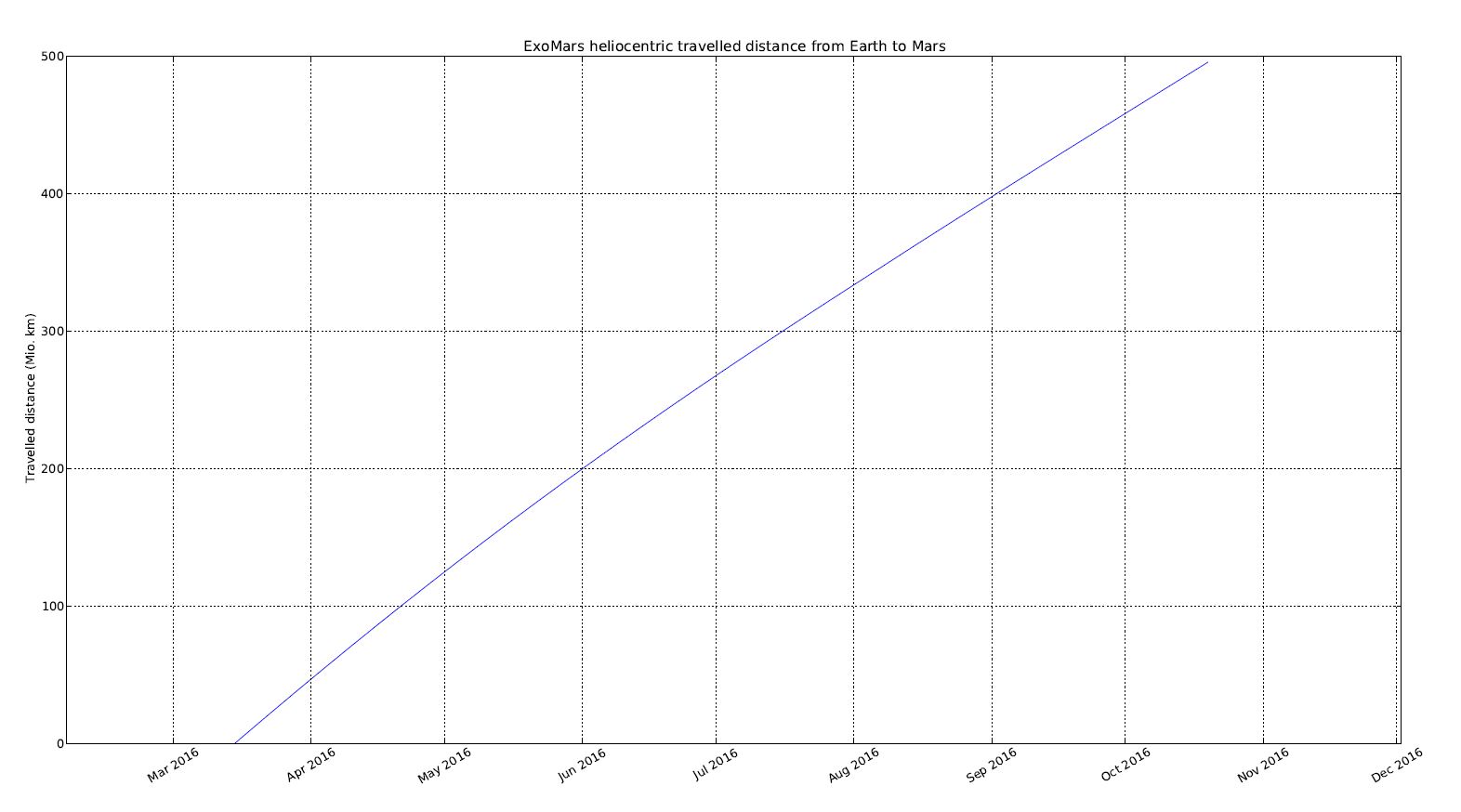 In fact, you can use this chart as a handy (although admittedly rough) reference guide throughout the interplanetary transfer. My eyeball tells me that today, 24 March, the craft has travelled about 20 000 000 km with respect to the Sun (while the YouTube animation above tells me that it is still about 126 000 000 km from Mars).

The craft will from now on steadily slow down (note that the line in the chart above is not perfectly straight) and it heads along an ellipse 500 000 000 km long to meet up with Mars on 19 October, all with respect to the Sun.

Before we finally get to Frank’s answer, take a look again at the YouTube animation at the top of the post. Note that, roughly speaking, ExoMars/TGO ‘hops off’ of Earth on launch day, arcing further out from the Sun than Earth’s orbit, with Earth thereafter pulling steadily ‘ahead’ as it remains on its tighter, faster solar orbit.

As the spacecraft arcs further from the Sun, it slows down (although you can’t really see this very well in the animation), which confirms what Michael described, i.e., that whatever its initial heliocentric speed, it continuously slows down as it travels.

Importantly, however, it is travelling, with respect to the Sun, faster than Mars. As you can see toward the end of the animation, Mars in effect ‘catches’ the craft, which will have to use its main engine on 19 October in a lengthy 134-minute burn to slow itself by a whopping 1550 m/second in order to slow down enough to be captured by Mars gravity.

You have to compare the right numbers, which, in the case of spacecraft velocity and velocity records is not that straightforward.

The usually quoted record speed of New Horizon is 16.26 km/s (58 500 km/h), which is the escape velocity relative to Earth. It is true that up until now no other spacecraft has been launched at that speed relative to Earth.

Taking the quoted numbers of 500 million km in 218 days (precisely, 218 days 16 hours 56 mins from separation from the Breeze upper stage at 20:13UTC on 14 March until the Mars orbit insertion burn at 13:09 UTC on 19 October) gives an average heliocentric speed during cruise of 26.5 km/second, which is somewhere between the average heliocentric speed of Earth (30 km/s) and of Mars (24 km/s), as it should be.

I hope this makes it clear!

If this helps, here’s a quick run down of the math:

Note that this will be an average speed and, as Michael points out and as mentioned above, the craft’s speed will steadily slow as it proceeds along its path to Mars; but the line in Frank’s chart above is almost straight so this slowing is very modest.

It’s clear from Frank’s explanation and chart, and from Michael’s comments, that the important factor in the calculation of ExoMars/TGO speed is fixing a frame of reference, and this means using the Sun. We do this because gravity has by far the biggest effect on the spacecraft’s speed from now on (its own engine will have an effect, too) and the No. 1 source of gravity in our Solar System is, no surprise, the Sun. Massimiliano’s original question that referred to New Horizon’s speed was a bit of a red herring because the speed cited was with respect to Earth; ExoMars/TGO’s average speed of 26.5 km/second is more than enough to cover the 500 m km in 218 days – and we all look forward to its engine working rather well at the right time!

We’ll take a couple days to review the answers below and select those that came closest to including all or most of the points mentioned above.

That’s the end of our quiz challenge! Any replies posted after the date/time of this update (18:45 CET 24 March) are not eligible to win a tee-shirt. But you’re welcome to post comments!

Have a great weekend!

Having reviewed all the answers, many (most!) of which were very well done, we were able to select the ones that came closest to the answer provided by ESA flight dynamics expert Frank Budnik. In fact – there were a lot!

In the end, since the key point in formulating any answer was to realise that, as some of you mentioned, all speed is relative, and the most important first step is to select a consistent frame of reference, we decided to ‘select’ any answer that gave sufficient indication of this realisation (even if the subsequent calculation was a little off). So, without further ado, congratulations to:

You are invited to send an email to contactsocialspace@gmail.com with your name, postal mailing address and tee-shirt size – we’ll get a shirt mailed out to you right away.

And thank you very much for responding!