To catch a speeding satellite: Estrack redevelopment down under

Editor’s note: The Estrack team at ESOC are redeveloping the network’s tracking capability in Australia. The existing tracking station at New Norcia (NNO), which hosts one of three Agency’s 35m deep-space antennas, will be improved by the addition of a smaller, 4.5-m antenna for signal acquisition and tracking during the critical initial orbits of new missions. The existing Estrack station at Perth, Australia, will be dismantled, as its location has become untenable due to urban sprawl and radio interference with TV broadcast trucks, among others.

We spoke with Gunther Sessler, the NNO-2 project manager (see also Tracking new missions from down under).

Q. What does the NNO2 project encompass?
Together with several other factors, the termination of the S-band frequency licence in Perth by end of 2015 is driving the decision to relocate to New Norcia the core X-band launch and early orbit phase (LEOP) functionality of ESA’s Perth station. 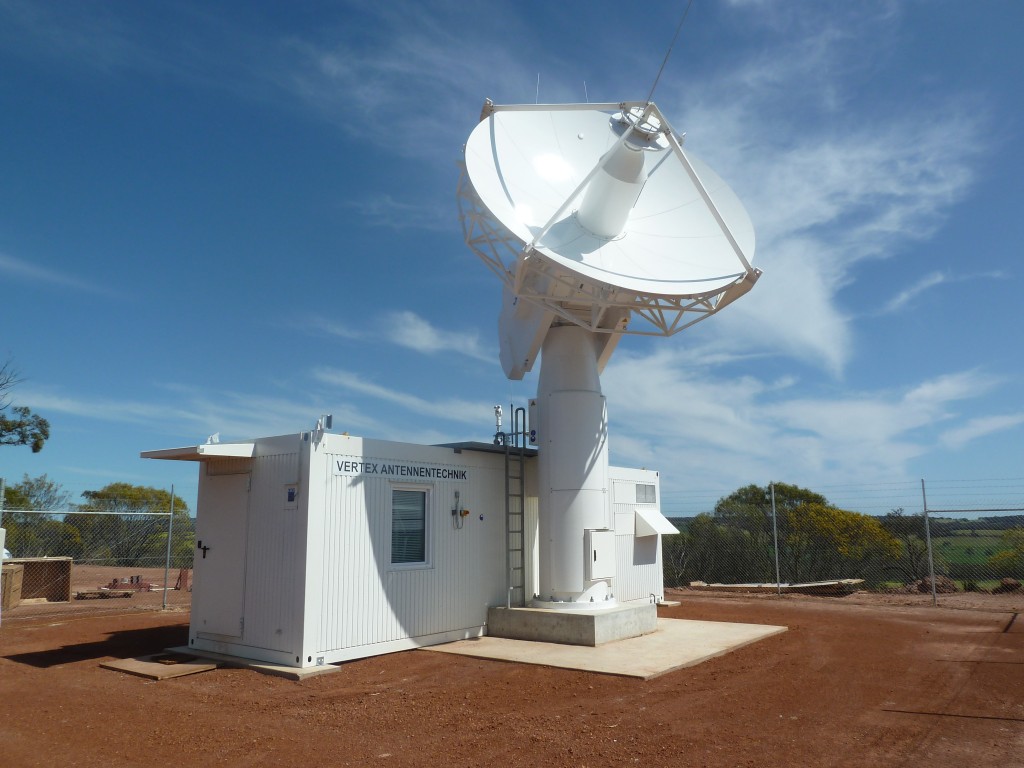 We are therefore deploying an acquisition aid antenna, to be known as NNO-2, to provide X-Band LEOP support from New Norcia (NNO). The NNO-2 terminal will allow acquisition and tracking during the critical initial phase of the LEOP (roughly up to 100 000 km range) and can also slave the 35m deep space dish (NNO-1), which then again can retrieve ranging and ‘high-rate’ telemetry data (i.e. transmissions sent from satellites moving quickly across the station’s field of view).

To be more specific, NNO-2 will provide an X-Band up- and down-link capability for newly launched spacecraft under ‘high dispersion spacecraft injection’ conditions – when we might not know the new satellite’s trajectory very well. Furthermore, an additional X-band wide-beam uplink functionality will allow for satellite emergency support in case we don’t know the satellite position shortly after separation from the launcher at all.

The new terminal – the antenna and related electronic equipment – also allows for S-Band reception at 2200 – 2300 MHz for launcher tracking, including Ariane 5, Vega and Soyuz.

Q. What’s the timeline for deployment?
The project got underway at the end of 2013. In 2014, while the new antenna was being designed and built, a suitable location was sought at the existing New Norcia site.

The chosen location was then prepared for antenna terminal deployment. In the middle of 2015, the antenna was installed; overall system testing took place in September and October, and completion of the development project is planned by the end of this year.

Q. Who is involved (at ESOC? from Industry? From NNO/Australia?)
We have a great team at ESA and in industry making this interesting project possible. The antenna front-end was the most complex part of the project, as the NNO-2 antenna had to be designed and built from scratch.

From the ESA side, Peter Droll was handling this critical part of the project and leading it to success, together with Vertex Antennentechnik GmbH, in Germany, to whom the NNO-2 front-end contract was awarded. In particular, the stringent requirements on pointing (to allow slaving of the big 35m NNO-1 dish) and the need for colocation of the S- and X-band feed (feed design and production by MIRAD microwave AG and MiniAntenna GmbH, both Switzerland)   in such a small antenna provided extra challenges. In the end, Michael Palecki and his team at Vertex, together with Peter Droll were able to ensure that the antenna can perform as desired and that it even exceeds the expected performance in many areas.

Also at ESA, Udo Kugel ran the deployment of the new infrastructure – the antenna and calibration tower foundation, electrical power, access tracks, cable ducts, etc. – via Inmarsat UK/Australia and Stratham Engineering Australia. This part turned out to be more challenging than expected, as numerous permits were needed and there was a lot of time-consuming administration before the actual work could start.

Once it finally started, Wayne Sheffield from Stratham Engineering, who was making things work on-site, and Udo could make up on the lost time and finish the infrastructure with the help of a number of local Australian companies.

The back-end changes for NNO-2, which included among other items the connection of the NNO-2 front-end signals to the existing NNO-1 back-end, was awarded to NDSatCom, in Germany, and handled from ESA side by Gérard Galtié and Matthias Lohnert. Andreas Scior, also at ESA, took care of the calibration tower, which is required for testing the new antenna.

The Inmarsat Maintenance and Operations team, who are responsible for operating ESA’s New Norcia site, helped with the deployment of the new antenna and performed testing; for this activity, Luca Foiadelli, the ESA station engineer for New Norcia, provided substantial support.

From ESA, as well as from the industry side, many others have and are contributing in the area of engineering, operations, administration and navigation. I would personally like to thank each for their contribution and dedication to the NNO-2 project.

The success of the project is a direct result of the great team we have at ESA and in industry!

Q. Does this upgrade at NNO replace Perth station?
Due to the closure of Perth, Estrack would lose its capability to support LEOPs from Western Australia, which is a critical location for most ESA satellite launches. For this reason, it was decided to build a small antenna dedicated to LEOPs at NNO.

It therefore replaces many of the Perth LEOP capabilities and adds additional functionalities that will be quite useful during a LEOP (e.g. wide-beam uplink). On the other hand, due to the smaller antenna dish size, routine tracking, telemetry and commanding operations will not be possible and these have to a large extent been transferred to commercial service providers, including SSC Australia operating the Western Australia Space Centre near Dongara/Geraldton.

Q. What are some of the features of the new antenna?
The beam width of the NNO-2 antenna is such that it can deal with high orbit insertion dispersion and can therefore more easily acquire a newly launched satellite, even if there has been a large over- or under-performance of the satellite launcher.

Furthermore, the site for the antenna terminal was chosen such that the horizon profile is close to 0° (or even below), such that the satellite can be detected very early – just as it rises above the horizon.

Finally, the terminal was designed for low maintenance and operation costs and the ability to go into a hibernation mode between LEOPs, which might be several months apart.