Our partners in USSTRATCOM with whom we have been sharing data throughout the campaign have confirmed the re-entry of Progress M-27M.

This corresponds to an altitude of around 80 km (so, roughly, 10 minutes from touch down). This would have been the point in time where the re-entering object was the hottest and so observable from space. This time also corresponds to a location of 51 Degrees South latitude and 273 Degrees East longitude, over the ocean west of the southern tip of the coast of Chile.

The position and time are well inside the window predicted by ESA’s Space Debris Office.

ESA Space Debris team reentry predictions now show the reentry window has shrunk to include just the night of Thursday/Friday, 7/8 May; we can exclude any time after early Friday morning. There are some first indications that the likelihood for a reentry over North America or Europe has dropped significantly. 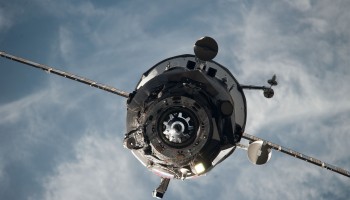 As an ISS partner agency, ESA is in close contact with the Russian and US authorities regarding the Progress M-27M / 59P mission situation. The comments below are provided by Dr Holger Krag, Head of ESA’s Space Debris Office at ESOC, Darmstadt, Germany. The Space Debris Office coordinates ESA’s research activities on space debris, coordinates such activities with national research efforts, and provides operational services.

The team at ESA’s Space Debris Office are providing regular reentry estimates to ESA Member States based on analysis of radar tracking data provided by our US partners, enhanced with data from Germany’s TIRA tracking radar (operated by Fraunhofer FHR).

Throughout this process, ESA and United States Strategic Command (USSTRATCOM) have been exchanging measurement data and prediction results. This follows the spirit of the debris data-sharing agreement between the two organisations and both parties have benefited significantly.

As of Thursday morning, 7 May, we are forecasting an uncontrolled reentry by Progress M-27M any time between later in the evening today through to mid-day tomorrow, 8 May.

The current large uncertainty is due to the unpredictability of the drag forces working on the vessel, and is a standard feature of such predictions. Any reports claiming precise re-entry times and locations at this stage are speculative.

Note that the data do appear to indicate that the Progress vessel is experiencing a very fast rotation rate of around one revolution every 1.8 seconds.