A year on-station for Gaia

One year ago, Gaia performed its last major orbit insertion burn and was stable at ‘L2’ (see What’s an ell-two?).

Gaia is an ambitious mission to chart a three-dimensional map of our Galaxy, the Milky Way, in the process revealing the composition, formation and evolution of the Galaxy. Credit: ESA–D. Ducros, 2013

After a smooth, but operationally intense lift-off, LEOP (launch and early orbit phase) and transfer phase, in which Gaia travelled the 1.5 million km from Earth to the point at which the sky survey will be done, the work to start Gaia’s mapping task was only just beginning.

The five thrusters used to perform the orbit insertion are commanded to stop firing and there are smiles in the control room at ESOC as the telemetry on the screens confirm the last planned ‘critical operation’ is successfully completed.

Earlier, Gaia’s operators had to perform a number of critical operations in the initial post-launch period: the first autonomous flight activation; sun-shield deployment and three orbit manoeuvres – when the thrusters were heavily used – all between 2 and 27 days after launch.

Had these gone wrong, the mission operations team would have been in a race against the clock to stop Gaia drifting off into interplanetary space.

Today we are one year on from the last of these.

The blue line in the Earth-centered plot below shows the correct trajectory (i.e. the nominal case when the manoeuvre worked) and the green shows what would have happened without this manoeuvre (drift around the Earth-Moon system followed by escape into interplanetary space). 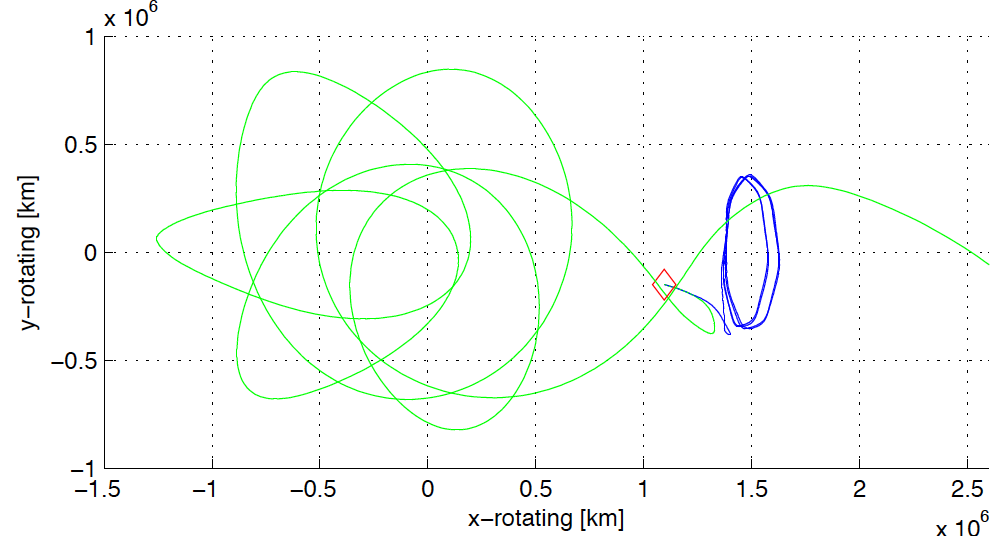 Now that this activity was over, the operations team could fully focus on the commissioning phase, testing and configuring the spacecraft and payload operations until system performance was ready to perform science.

This was not time-critical, but was technically demanding, and this phase would eventually last six months.

Gaia is a one-off, purpose-built spacecraft that is capable of mapping the positions of one billion stars to unprecedented precision (to the micro-arc-second level, comparable to the width of a smart phone on the Moon as viewed from Earth). This performance is far beyond anything previously achieved, and the Gaia spacecraft is a marvel of engineering in its own right.

Spacecraft such as Gaia are complex machines, which have layered operational modes.

The spacecraft can be flown and operated, performing the more basic tasks, with a subset of service module units on and working. Just like the tip of a pyramid can only be placed on top after all other stones have been laid, all on-board prime units must be switched on and correctly configured for full performance. This, together with checking a number of redundant units and functions, is the task of teams on ground during the commissioning phase.

The Gaia spacecraft has a relatively large fraction of ‘bespoke’ units i.e. custom designed, due largely to the incredible precision requirements. Not the least of these are the telescopes and camera.

Gaia’s camera is the most impressive ever flown in space, containing 106 CCDs, which are around 90% light efficient (a CCD in a typical digital camera is around 20% efficient).

These have to be linked to the on-board attitude control system to achieve the needed and incredible precision for mapping the stars.

Gaia must rotate once every 6 hours to scan the heavens and this rate is so precisely controlled that the error is equivalent to one rotation every 410 years. There are (and can be) no moving parts on board, so the data is downlinked through a novel electromagnetically steerable antenna.

Attitude control is provided by a micro propulsion system that has its first flight use with Gaia. This delivers micro-Newton levels of thrust primarily to oppose the quantum mechanical force exerted by sunlight falling onto the sunshield. An atomic clock is used for precise time-stamping, which in fact allows controllers to see the time dilation effects from Einstein’s Theory of General Relativity.

Just after entry into the operational orbit, most of these hardware units were either off or had hardly been used at all.

One year ago, the critical phases were over and the operations team began focusing on the complex task of bringing the spacecraft up to full performance.

In terms of what was planned, this consisted of an iterative phase where teams on the ground send commands to move the mirrors and adjust the spacecraft spin rate and then industry (i.e. the spacecraft manufacturer) and the mission science teams analysed the results before the next tuning cycle. The other major element planned was the tuning of Gaia’s seven powerful video processing units, each connected to a row of the camera’s CCDs, responsible for identifying and characterizing the stars that will make up Gaia’s map.

First noticed through an apparent dimming of the on-board laser used to track the angle between the telescope mirrors, and later confirmed by data from the stars themselves, ice was unexpectedly building up and had to be dealt with .

These issues, like many others, were dealt with and solved in a series of brainstorming review meetings between experts, some of which required in-orbit special operations to be developed and executed to provide the necessary data. For example, Gaia’s normally rock-stable sun-attitude was changed twice in special operations designed to characterise the stray-light problem.

Examples elsewhere from the spacecraft commissioning period included a micro-propulsion thruster with unexpected performance levels and a back-up chemical thruster that had a failed valve (meaning it was permanently lost).

Teamwork has been critical

Again, teamwork in brainstorming review meetings was critical to solving these issues. The on-board software could be quickly reprogrammed to match the new performance of the micro-propulsion thruster and the on-board protection software was changed to make sure the system would never try to use the chemical thruster that had failed (for this was a thruster present in case the spacecraft was in trouble and needed to put itself into ‘Safe Mode’). 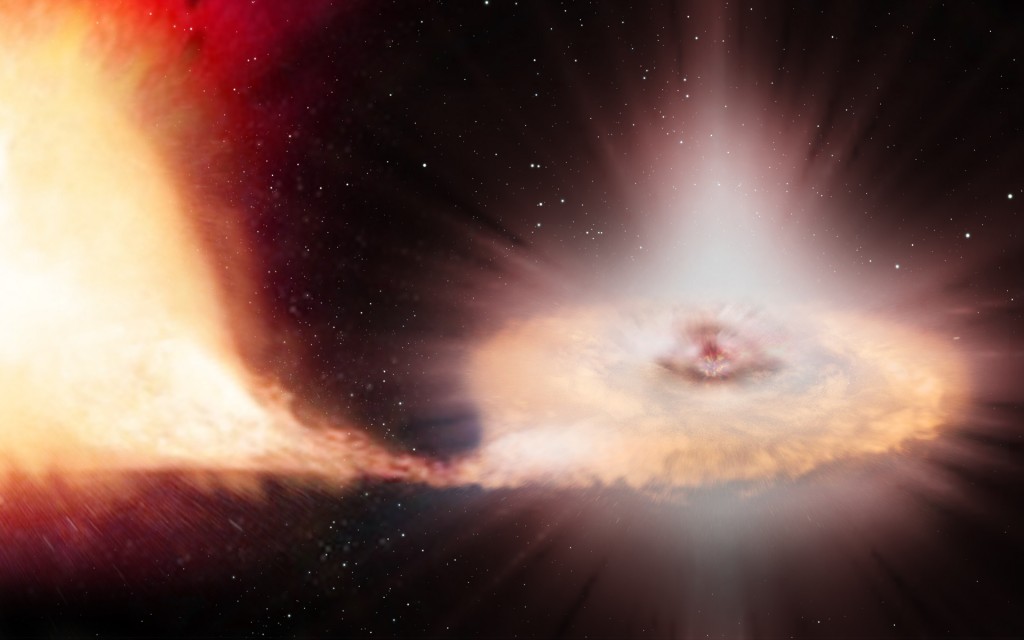 An artist’s impression of a Type Ia supernova – the explosion of a white dwarf locked in a binary system with a companion star. Credit: ESA/ATG medialab/C. Carreau

By the end of the commissioning phase, the teamwork between the ESA operations, project and science teams together with the industry experts at AirbusDS and the wider Gaia scientific community organised into the Data Processing and Analysis Consortium (DPAC) had delivered the spacecraft in excellent shape.

The spacecraft was correctly configured and the software of the majority of on-board units had been changed based on the lessons learned to date. In getting to this stage, approximately 400 000 telecommands had been sent by ground teams.

Shortly after the commissioning ended, a new Survival Mode was activated on board, using thrusters that are normally used only for orbit manoeuvres. This meant that single failure tolerance had been fully restored, even with a permanently lost thruster.

By July 2014, Gaia was busy mapping parts of the sky that had been calibrated by ground telescopes, before its nominal scanning mode was entered in September.

At this point Gaia was working so well that it was producing more data than originally foreseen, since it was able to see stars fainter than required. Towards the end of the year, operators had to come up with a method to partially automate ground operations allowing Gaia to take advantage of more ground station time and expand its mapping data set.

It’s been a busy first year for Gaia, but at the one-year point there’s a good sense of achievement.

The science data are now coming down in huge quantities (11 billion camera transits were recorded by the one-year launch anniversary), with anticipation slowly building for what Gaia may find in the coming years.

But even before the first map release next year, Gaia is already making discoveries (see Gaia discovers its first supernova).