This report on the success of last week’s laser communication test between ESA and NASA was sent in by Marco Lanucara, one of the Estrack engineers on Tenerife for the test campaign.

ESA has joined NASA to help achieve a major breakthrough in space communications. 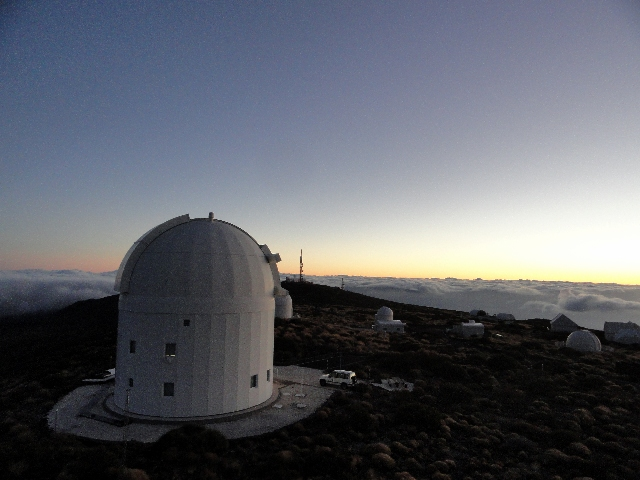 ESA has joined NASA for a major breakthrough in space communications. Using NASA’s Lunar Atmosphere and Dust Environment Explorer (LADEE, launched on 7 September 2013 and currently in orbit around the Moon), optical communications between a NASA spacecraft and an ESA ground terminal have been demonstrated up to lunar distances, pointing the way to future laser communication from deep space.

For the ESA Optical Ground Station (OGS, located in the Tenerife island), the demonstration included, so far, robust and very fast all-optical uplink and downlink acquisition, as well as downlink reception at data rates as large as 40 Mbps. 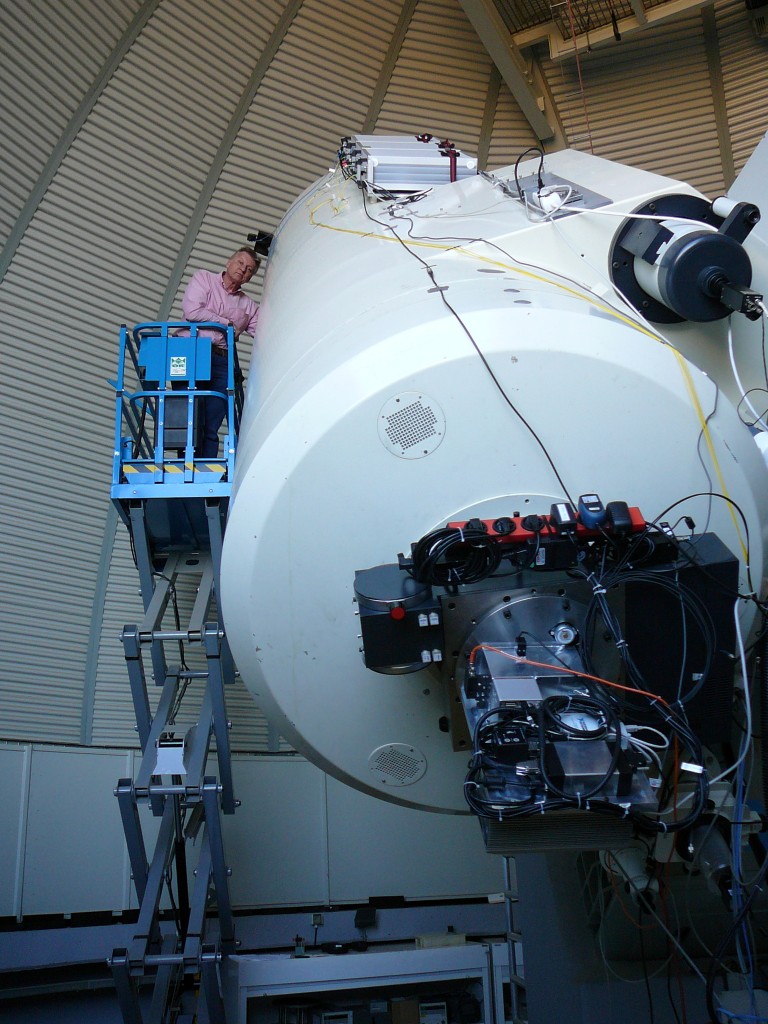 During the coming weeks, uplink communications at 20 Mbps will be enabled, and accurate Time Of Flight measurements will be performed, to be used for orbit determination.

The first LADEE acquisition was at 06:36:17UTC on 26 October 2013; when the first blurred spot showed up on the infrared tracking camera as an answer to the radiated OGS beam, years of hard work, frustrations and exaltations made sense! 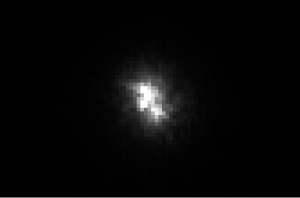 At ESA, participating in the Lunar Laser Communication Demonstration (LLCD) project has included – in a very short time of just 18 months – a series of activities, including:

Several European industrial partners are participating in the adventure, including RUAG (optical sensor and downlink equipment), Axcon (uplink data generator and time of flight measurement system), Synopta (beam expander and alignment system), 3SPhotonics for the laser amplifiers and Photline for the seed lasers and the data modulation system. 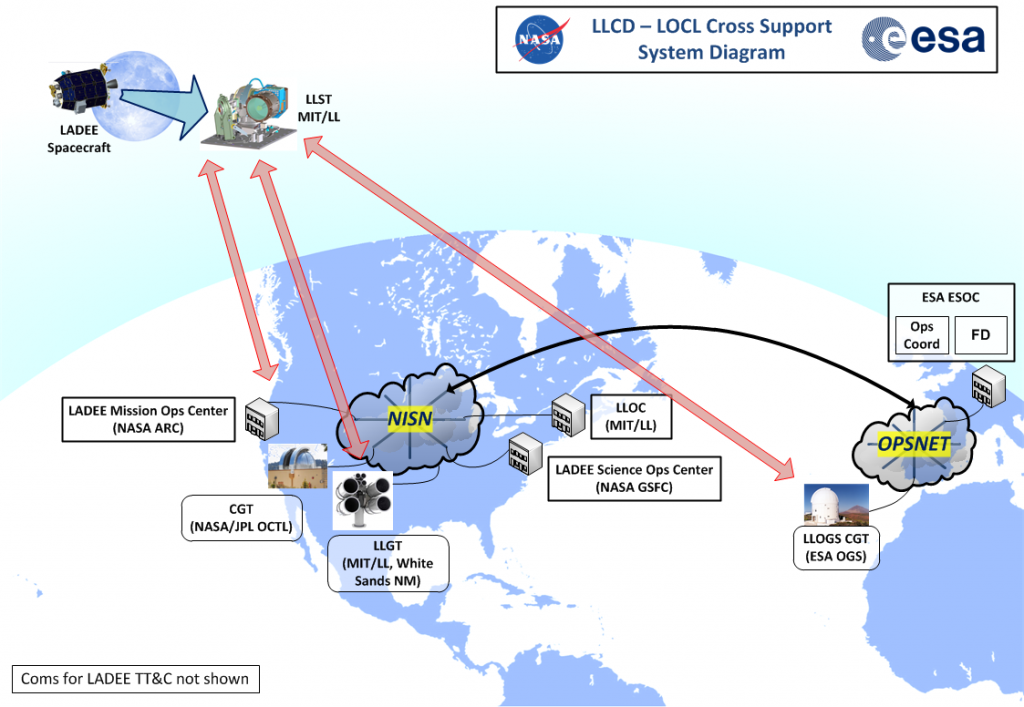 It takes a team

Within ESA, teams from two directorates (TEC and HSO) worked together, under the coordination of our colleagues Zoran Sodnik (TEC-MMO) and Igor Zayer (HSO-GSS); experts from both areas worked to develop the key system components and technologies, including implementing at the OGS a 1550nm-wavelength uplink and downlink optical system, the development of high-data-rate receivers employing pulse-position modulation, and the procurement of optical sensors based on near-infrared photomultiplier tubes. 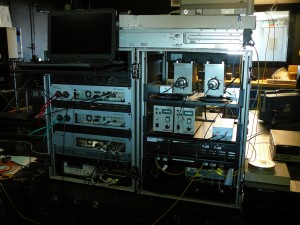 The current campaign in Tenerife (from 26 October to 9 November) involves the LADEE spacecraft, the Lincoln Laboratory of the Massachusetts  Institute of Technology (MIT), the LADEE Laser Operations Centre, the ESA OGS and ESA’s Space Operations Centre (ESOC).

After two laser communication passes on the first day (26.10), used to consolidate basic acquisition and operation principles, there were six more passes through to 29 October; these were devoted to the key validation goal of receiving data at large rates (around 40 Mbps) after an all-optical acquisition under various LADEE configurations.

Some difficulties were identified during the live demonstration – linked to the extremely high pointing accuracy required for the uplink system (i.e. a few arcseconds). These are currently the subject of investigation. 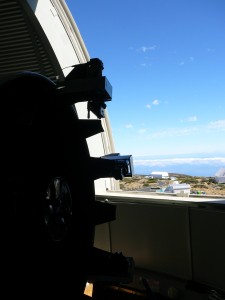 The current set of passes, which run until 11 November, will be devoted to completing the downlink validation using Mercury-Cadminimum avalanche photodiodes with high quantum efficiency (from CE LETI), and to improving the uplink pointing, enabling further validation of uplink communications and optical ranging.

The feasibility of reliable optical communication at lunar distances has been established, demonstrating data rates of 40 Mbps from NASA’s small laser communication terminals on board the LADEE spacecraft to ESA’s optical ground station. 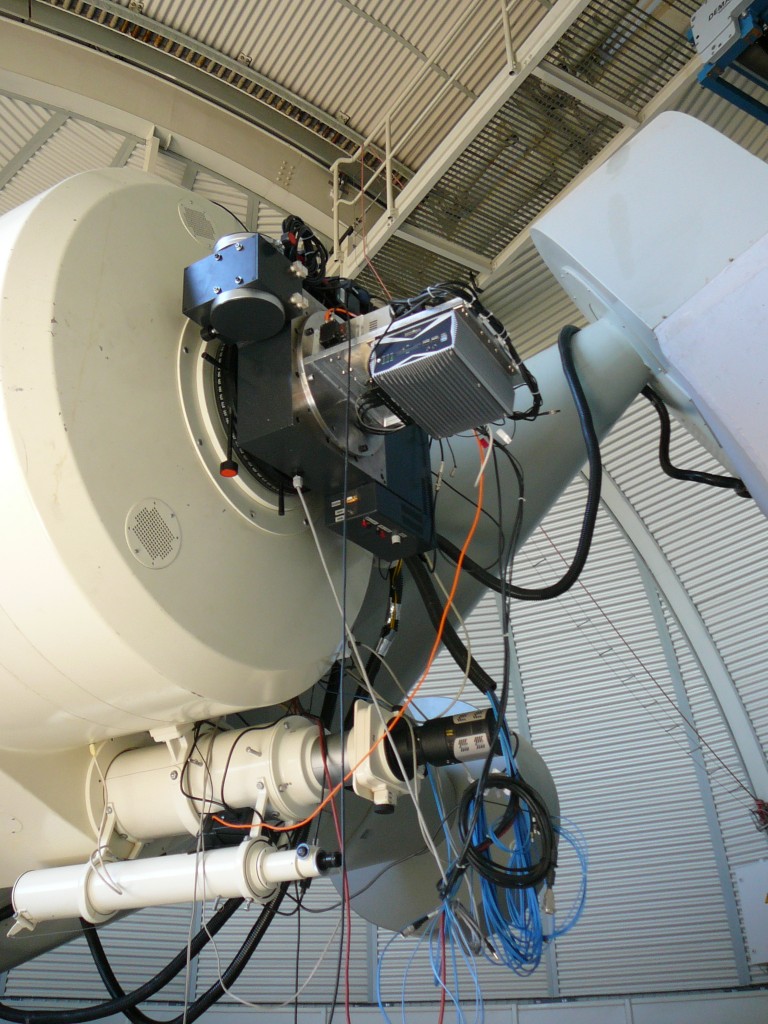 Another EDRS-compatible laser communication terminal on board the recently launched Alphasat spacecraft is being tested (also from the OGS) as part of the Alphasat In Orbit Testing campaign. This is the last stage of the commissioning of the technology demonstration payload hosted on board the commercially operated communication satellite. It confirms the capability of the payload to point the laser beam towards a target from geosynchronous distance, and its readiness for very high rate data transmission via optical bandwidth.