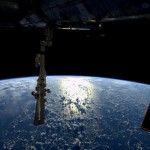 We only have one Earth (Credit: ESA/NASA)

Observing Earth from far above, ESA astronaut André Kuipers is acting as a world ambassador for the World Wildlife Fund (WWF), which issued its flagship publication the Living Planet Report today.

The WWF Living Planet Report measures changes in biodiversity by tracking 9000 populations of more than 2600 of the world’s species. André wrote the foreword to the report and is doing his part to show how fragile our world really is.

We only have one Earth

André has been concerned about our planet since his last mission to the International Space Station in 2004. He has been sending us images that show the impact humans are having on our climate.

“We only have one Earth. From up here I can see humanity’s footprint, including forest fires, air pollution and erosion – challenges which are reflected in this edition of the Living Planet Report,” said André.

The report illustrates how our demand on natural resources has become unsustainable. By 2050, two out of every three people will live in a city. Humanity requires new and improved ways of managing natural resources.

More on the ESA Portal and the WWF website.