Everybody is familiar with liquids. In an average day we get to use, handle or drink water and other liquids. It is known how fluids (that is liquids and gases) behave: when subjected to a net force, maybe pressure, a temperature difference or gravity, they can move freely.

Scientists have been studying how fluids move for centuries, and managed to write mathematical formulas that can describe and predict such movements. Unfortunately, these equations are extremely complex and mostly only approximate solutions are known. As a result, our quantitative understanding of fluid movement is just partial.

This is especially true for natural phenomena where the forces can be enormous and unpredictable, like in oceans or in the atmosphere. Or the interior of the Earth like the mantle, where rocks are exposed to pressures and temperatures so incredibly high that they slowly move and adapt their shape. That is, over hundreds of years rocks flow just like a very viscous liquid. Scientists try to study such flows but cannot observe them directly due to the fact that they take place deep beneath the surface of our planet.

The only way is to have computers simulating those movements starting from the equations, but how to check whether computers are correct? This is what the experiment GeoFlow II was designed to answer on board the International Space Station. GeoFlow II is a miniature planet that has some essential ingredients: a fluid that can freely move inside a spherical container that rotates, temperature differences and simulated gravity directed towards the centre just like we see on a real planet. 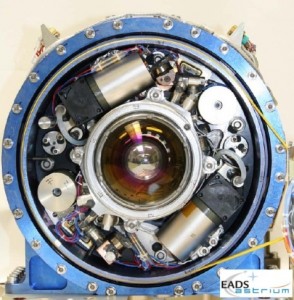 Geoflow hardware showing the rotating tray and the spherical container

By taking pictures of the fluid movements, scientists are able to understand the essential characteristics of the flows and determine whether computer simulations are correct or whether they need to be refined and improved towards a better understanding of the elusive movements that take place inside our planet. One noticeable finding is for example already apparent from Geoflow II results. Plumes of hotter liquid were visible moving to the exterior sphere. These plumes or thermal upwellings are predicted by computer simulations of convection under extreme forces and are believed to be present inside the mantle.

Understanding our planet is not the only advantage of the Geoflow experiments. A better understanding of this type of fluid flow could benefit industrial applications by improving spherical gyroscopes, bearings and centrifugal pumps for example. 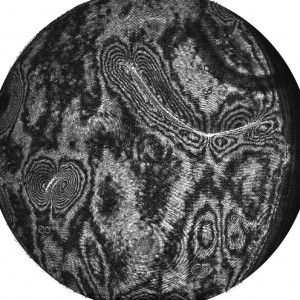 The Geoflow II campaign has now reached completion onboard ISS in the Fluid Science Laboratory, after many months of scientific runs operated from the Spanish and Italian User Support & Operations Centres and the help of André and his colleagues on-board.

The scientists from the University of Cottbus in Germany together with other six universities in France, Germany and United Kingdom are analysing the promising results. The team is preparing publications, both in Journals on Fluid Physics and on Earth & Planetary Science. They have good reason to party, not only because of the completion of the experimental campaign and the related publications, but also since the Geoflow II science team recently won a prize (‘Deutschland – Land Der Ideen 2012’) for their experiment. Triple congratulations!