Starting on Sunday ESA astronaut André Kuipers and his NASA colleague Dan Burbank will eat a special diet for ESA’s SOdium LOad in microgravity (SOLO) experiment for two periods of five days. Find out more about SOLO and what it can help us to learn in this blog contribution from ESA’s Mission Science Office: 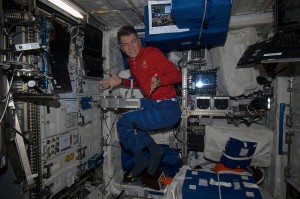 Osteoporosis is a harsh disease that reduces the quality of life for millions and costs Europe around €25 billion each year. It typically affects the elderly so the rise in life expectancy in developed countries means the problems inflicted by osteoporosis are increasing.

Fortunately, research done in space may change the game. Astronauts on the International Space Station experience accelerated osteoporosis because of weightlessness, but it is carefully controlled and they can regain their lost bone mass once back on Earth. Studying what happens during long spaceflights offers a good insight into the process of osteoporosis – losing calcium and changing bone structure – and helps to develop methods to combat it.

It has been known since the 1990s that the human body holds on to sodium, without corresponding water retention, during long stays in space. But the textbooks said this was not possible. ‘Sodium retention in space’ became an important subject to study. 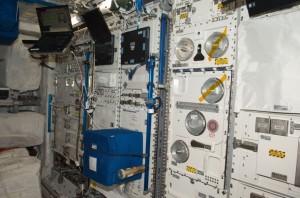 Salt intake is being investigated in a series of studies, in ground-based simulations and now also in space, and it was found that not only is sodium retained (probably in the skin), but it also affects the acid balance of the body and bone metabolism. So, high salt intake increases acidity in the body which can accelerate bone loss.

ESA’s SOLO experiment zooms in on this question. André and his colleague Dan Burbank will be starting two diet sessions coming Sunday 29 January. For both diet sessions, they will eat exactly what is laid out for them in a menu. Luckily they had their say beforehand on-ground in what they liked and disliked. But what they will be eating in these diet sessions for two periods of five days is exactly prescribed in terms of calories and nutrients. One session has a normal salt level (11.5 g salt per day), the other session a low salt level (2.9 g salt per day).

During these diet sessions, the crewmembers take measurements and collect samples from their own body, i.e. blood and urine. These measurements and samples allow the science team to analyse certain hormones, bone formation markers and many other parameters to tell the impact on their body and bones of the salt level in their food.

André works with the MELFI freezer

They will take a body mass measurement, not obvious in microgravity as one can imagine (see photo of Paolo Nespoli). They will collect urine samples – not simple either to collect in space – and they will draw venous and fingertip blood samples. The ESA and NASA crewmember will use the NASA Human Research Facilities in European Columbus laboratory to do these measurements (see photo) and collect their samples in the MELFI freezer in the Japanese module (see photo). Urine and blood samples will later be returned to Earth on a Russian Soyuz vehicle. A true International Space Station experiment!