André working on the Neurospat experiment

A few weeks into André Kuipers stay on the International Space Station (ISS), we caught up with Hilde Stenuit from ESA’s Mission Science Office (MSO). Together with a small team at the MSO, Hilde supports ESA experiments conducted on the ISS, including those being performed during the PromISSe mission.

For the PromISSe mission André is trained on about 35 ESA experiments covering a range of disciplines, including human physiology, biology and physical sciences. He will also take part in a technology programme and education activities. As part of the ISS crew, André is also involved in some 20 experiments for the other international partners.

With respect to the ESA experiments, so far André has completed the first session of several human physiology experiments. He will repeat these experiments later in the mission allowing for a comparison between data early in the flight, midflight and towards the end of the mission.

Some of the experiments involve filling in a daily or weekly questionnaire, such as one looking at the phenomenon of headaches in space. “Space Headaches is an interesting experiment involving a well-known team based at Leiden University,” explains Hilde. “They are looking to understand the causes of headaches in space – is it linked to the fluid movement towards the head that occurs in space? Is there a link between headaches on the ground and in space?”

Other experiments are a bit more invasive for the subjects. “For the first run of the Neurospat experiment, André had to wear a special cap with precisely placed electrodes,” says Hilde. “Neurospat records signals in the brain whilst the astronaut performs brain-taxing tests involving processes such as decision-making or memorizing.” The aim is to understand the mechanisms involved in the changed spatial cognition seen in weightlessness. 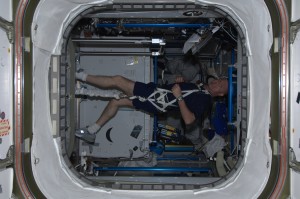 André exercising in the ISS

There was also a maximum exercise test for André last week which allowed for first data collections of the Thermolab and EKE experiments. Whilst André exercised to exhaustion, data was collected using the portable Pulmonary Function System (PFS) that analyses the gases in the air breathed out by the astronaut. André was also kitted out with sensors to measure changes in his body’s core temperature. The scientists involved in Thermolab are investigating the changes in microgravity to the mechanisms that regulate the core temperature.

Using some of the data gathered during the maximum exercise test, the EKE experiment is looking to optimise the astronauts’ physical training protocol – the preservation of their aerobic capacity being the major goal of exercise countermeasures during their stay in space.

With the guidance of operators on the ground, André has also performed ultrasound scans of the blood vessels in several locations in his body for the Vessel Imaging experiment. Repeat measurements later in the mission will allow the scientists to assess the changes in blood vessel wall properties during and after long-term exposure to microgravity.

Some of the ESA experiments in other scientific fields have been performed already. In fact, one of the first tasks after arriving at the ISS with the Soyuz spacecraft in December was to transfer some time-critical biology samples for the ROALD-2 experiment to the Station’s KUBIK facility. “This went very smoothly,” says Hilde. “The biological cells were activated and then later fixed using chemicals and transferred to the MELFI freezer.” These samples will return to Earth with the Soyuz TMA-22 in March.

Other ESA experiments during the PromISSe mission only require the crew to place samples or hardware in one of the Station’s many scientific facilities. Geoflow 2, a fluid science experiment is currently running inside the Fluid Science Laboratory, a facility located in the European Columbus laboratory. Other ESA experiments are ongoing in the background and require no immediate intervention from the crew – such as the SOLAR platform located outside the Columbus laboratory that studies the Sun’s electromagnetic radiation, and the Vessel ID System, a space-based experimental ship detector.

Even though André’s mission has not yet reached the 1-month mark, he has already been working on the majority of the ESA and partner experiments. “Thanks to all André’s activities on the science experiments, the PromISSe mission science complement is running really smoothly,” says Hilde.

Looking to the immediate weeks ahead, there are plenty of ESA experiment activities scheduled on André’s timeline. Including the physical sciences experiment SODI-DSC on thermal diffusion in fluids, the weekly Space Headaches questionnaire, preparations for the Convection education experiment and preparations for the use of a high-definition 3D camera, ERB-2. André and his crewmate NASA astronaut Don Pettit will also soon face two periods of 5 days of eating a special diet for the SOLO experiment.

André Kuipers explains in this video about how we use space every day and about importance of experiments and research in space: