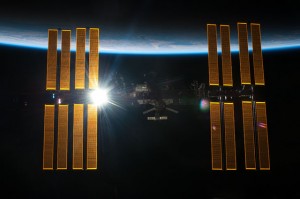 Later today the International Space Station will perform a debris avoidance manoeuvre. At 17:10 CET (16:10 GMT) Russian mission controllers will fire the Zvezda service module engines to boost the Station’s orbit in order to avoid a piece of debris from an Iridium satellite.

Without the orbit boost, the 10-cm diameter object would have made two close approaches to the ISS on consecutive orbits on Friday, passing within a radial distance of less than one kilometre with an overall miss distance of between one and 24 kilometres.

Claudio Sollazzo, ESA’s Mission Director for Expedition 30, confirms that there is no cause for alarm: “We’ve gone through many of these debris avoidance manoeuvres; it is a standard nominal procedure”.

“Identifying risks to the International Space Station goes on all the time,” explains Claudio. “Once we know there is a potential risk, the Station’s orbit is refined, with the usual result that there is no collision. This piece of debris is quite standard but has been identified quite late, so an avoidance manoeuvre is needed. The probability of a collision is steadily decreasing, but we will still perform the manoeuvre as a safeguard.”

Claudio reassures that there is no risk to the crew and they will continue their work as normal: “At the moment the crew has not been asked to go to their Soyuz spacecraft, the only case when we do this is when the debris is identified too late – that has only occurred a couple of times.”

The debris avoidance manoeuvre will eliminate the need for a scheduled reboost of the Station next week. The reboost had been planned to put the Station at the proper altitude for the launch and docking later this month of the Russian ISS Progress 46 cargo ship.