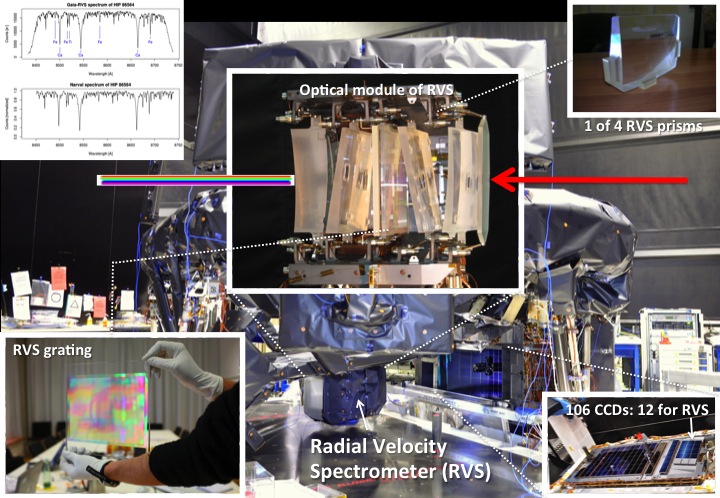 The accuracy that Gaia astrometry is aiming for can only be achieved above the Earth’s atmosphere. The RV accuracy that RVS is aiming for (a few km/s for bright stars) can be achieved from the ground: however, the ground-based RV follow-up of the 118,200 Hipparcos stars managed about 20,000 stars in 15 years (a remarkable effort at the time!). Therefore it was decided to include an RV instrument onboard Gaia from the beginning and thus RVS was born.

RVS is an optical module located between the last mirror (M6) and the 12 RVS CCDs at the right edge of the Gaia focal plane (see Figure 1). RVS consists of six optical elements: a transmission grating (see bottom left in Figure 1), which disperses all the light entering RVS into medium-resolution (λ/Δλ ~ 11,500) spectra; a band-pass filter, which limits the spectra to 845–872 nm (wavelengths visible to the human eye are 400-700 nm); and four lenses/prisms (see top right in Figure 1) to correct the main aberrations of the telescope.

The RVS wavelength range is chosen to include a set of three absorption lines called the calcium triplet (see top left in Figure 1; click here for enlarged version of the spectra). Calcium is made by nuclear fusion in the centre of massive stars. When they explode as supernovae, the calcium can end up in the atmospheres of the next generation of stars (or in our teeth and bones!). If the star is moving away or towards Gaia, the calcium triplet (and all spectral) lines will be shifted by the Doppler effect, compared to their rest wavelengths. The RV of each star can be determined from RVS spectra by measuring these shifts.

The RVS Payload Experts (PEs) are the team, in DPAC, supporting the commissioning of the RVS instrument. The team, geographical locations and responsibilities are mainly split between Observatoire Paris Meudon (OPM) and Mullard Space Science Laboratory (MSSL, part of University College London).

Unfortunately, at least from my personal perspective, we are PEs, rather than Payload Specialists. Payload Specialists were astronauts who flew on the Shuttle with specific payloads. Even if we wanted to visit Gaia, we would not be able to because at the second Sun–Earth Lagrangian point (L2), Gaia is much further than any astronaut has ever been, over 1 million km beyond the Moon’s orbit! Having not been selected to become an ESA astronaut in 2009 (one of my competitors, Alexander Gerst, is on the International Space Station right now!), working on commissioning the RVS is probably the closest I have come to being in space!

One recent commissioning activity that I led was when the RVS CCDs had charge injected into them to check for and calibrate any radiation damage.

The most critical issue for the RVS PEs was to check that the six optical elements of RVS are producing spectra that include the calcium triplet absorption lines, allowing us to derive RVs. If we had not seen the calcium lines, we would have had a bone to pick with RVS (English idiom!). Figure 2 shows what a 2D RVS spectrum looks like on a RVS CCD. RVS spectra are summed in the ACross Scan (AC) direction (y-axis in Figure 2) to produce 1D spectra, like the one in the top left inset of Figure 1 (see blog article “Gaia takes science measurements” for more details on this RVS spectrum – the first to go public). The calcium lines are clearly visible (so ironically no bone to pick!).

Figure 2: Example of a 2D RVS spectrum, extracted by Pasquale Panuzzo (OPM). The three dark vertical lines are where calcium atoms in the atmosphere of this particular star have blocked starlight to form absorption lines in this star’s spectrum.

The biggest surprise for the RVS PEs was finding there was a scattered light problem. The Basic Angle Monitor (BAM) has a laser at the same wavelength as RVS so there was a commissioning activity in January to check the levels of the BAM laser light leaking into RVS. Because of this, we were the first to measure the Gaia instrument background and found it to be much higher than expected from the BAM laser alone. Since then, Gaia’s instrument background has become a hot topic in commissioning and astrometric and photometric PEs have found that their instrument backgrounds are also affected. Various experiments have been conducted to understand the source of the scattered light and the Gaia PEs have been analysing the results of these experiments and feeding the results back to ESA.

OPM have developed most of the RVS offline tools. This involves downloading about 31 Gb of data per day (the total is now 7 Tb), ingesting it into local databases and generating daily “First Look” reports to allow the RVS PEs to have a first look at the data. The offline tools have been used in three other very important ways. Firstly they were used to analyse quickly the RVS spectra during the best focus commissioning activity, which were independently verified by MSSL. RVS spectra do have the required sharp absorption lines, including the calcium lines, which reduce the uncertainty on RV measurements. These spectra were also used by OPM to derive the RVS resolution. In addition, OPM are verifying and optimizing the onboard Video Processing Unit parameters, which control how well the readout windows are centred around RVS spectra to make sure we capture as much dispersed starlight as possible.

MSSL has developed a local infrastructure and integrated the official on-ground RVS data processing pipeline, which includes modules by all of Co-ordination Unit 6 (“Spectroscopic Processing”). MSSL are now running it to investigate the RVS data. The pipeline consists of more than 60,000 lines of code, described in over 800 pages of documentation (Software Design Descriptions). It has involved a lot of debugging of software to ensure the pipeline can process real RVS spectra. The commissioning period included 14 days of undisturbed data obtained between 9 and 23 May. The challenge now for MSSL, having ingested all these spectra (more than 111 million!) into our databases, is to process them through the RVS pipeline to estimate how accurate the RVS RVs will be (as a function of stellar brightness). RVS was never designed to measure the RVs of all Gaia’s 1 billion stars. We will soon know the number of stars for which RVS will be able to measure an RV and what the RV accuracy will be. Whatever the answer, it should be tens of millions, making RVS the largest RV survey in history!

I was fortunate enough to be in French Guiana to see the Gaia launch but like all the RVS PEs, we have never actually seen the completed RVS instrument with our own eyes! Now we will never see it, as Gaia will not return to Earth. Nevertheless, we have been getting to know RVS in the last six months of commissioning through the data it is returning. Over the next five years (or more) of the mission, we will get to know the instrument in ever-greater detail. This will allow us continually to optimize its operation onboard Gaia and also the on-ground algorithms that process the data, ensuring RVS reaches its enormous scientific potential.