Update from the Gaia Project Team

A series of exhaustive tests have been conducted over the past few months to characterise some anomalies that have been revealed during the commissioning of Gaia following its successful launch in December 2013, as have been discussed in previous blog posts.

Key among these are an increased background seen in Gaia’s focal plane assembly due to stray light entering the satellite and reduced transmission of the telescope optics. In an effort to understand both problems, much of the diagnostic work has been focussed on contamination due to small amounts of water trapped in the spacecraft before launch that has been “outgassing” now that Gaia is in a vacuum.

The water vapour freezes out as ice on cold surfaces and since Gaia’s payload sits at temperatures between –100 and –150°C in the dark behind the big sunshield, that is where it ends up, including on the telescope mirrors. The ice initially led to a significant decrease in the overall transmission of the optics, but this problem was successfully dealt with by using heaters on Gaia’s mirrors and focal plane to remove the ice, before letting them cool down to operational temperatures again.

Some ice on the mirrors was expected – that is why the mirrors are equipped with heaters – but the amount detected was higher than expected. As the spacecraft continues to outgas for a while, future ‘decontamination’ campaigns are foreseen to keep the transmission issue in check using a much lighter heating procedure to minimise any disturbing effect on the thermal stability of the spacecraft.

With regards to the stray light, our analysis of the test data indicates that it is a mixture of sunlight diffracting over the edge of the sunshield and brighter sources in the ‘night sky’ on the payload side, both being scattered into the focal plane. A model has been developed which goes some way to explaining the stray light seen in the focal plane, but not all aspects are yet understood.

One key working hypothesis was that ice deposits have built up on the ceiling of the thermal tent structure surrounding the payload, and that scattering off this ice might enhance the stray light. Although there is no way to directly confirm that this is indeed the situation, the Gaia project team nevertheless considered ways of removing any such ice.

Unlike the mirrors and focal plane, the thermal tent does not have any heaters, so alternative solutions had to be explored. One option analysed in detail would involve altering the attitude of the spacecraft to allow sunlight to directly enter the thermal tent in order to remove any ice that might be there. The risks associated with this concept were assessed, and software and procedures developed to carry it out safely, but there is currently no plan to do so.

The reason is that we have also been conducting tests in our laboratories at ESTEC to try to replicate and better understand the situation. We have added layers of ice of varying thickness to representative samples of the same black paint that covers the inside of the Gaia thermal tent, to assess the ways it might be affecting the stray light. There is no evidence to suggest that thin layers of ice would in fact enhance the stray light and thus no evidence that an attempt to remove the hypothesised ice contamination in the tent would yield any benefit, hence the decision not to carry out this procedure.

Under the assumption that the stray light cannot be completely eliminated, we are investigating a variety of modified observing strategies to help reduce its impact over the course of the mission, along with modified on-board and ground software to best optimise the data that we will collect. As stated in earlier posts, even if we do have to work with the stray light, we already know that it will only affect the quality of the data collected for the faintest of Gaia’s one billion stars.

Stray light increases the background detected by Gaia and thus the associated noise. The impact is largest for the faintest stars, where the noise associated with the stellar light itself is comparable to that from the background, but there is minimal impact on brighter ones, for which the background is an insignificant fraction of the total flux.

The stray light is variable across Gaia’s focal plane and variable with time, and has a different effect on each of Gaia’s science instruments and the corresponding science goals. Thus, it is not easy to characterise its impact in a simple way.

Broadly speaking, however, our current analysis is that if the stray light remains as it is today, its impact will be to degrade the astrometric accuracy of a solar-type star at magnitude 20, the faint limit of Gaia, by roughly 50%, from 290 microarcsec to 430 microarcsec by the end of the mission. Things improve as you move to progressively brighter stars, and by magnitude 15, the accuracy will remain unaltered at approximately 25 microarcsec. 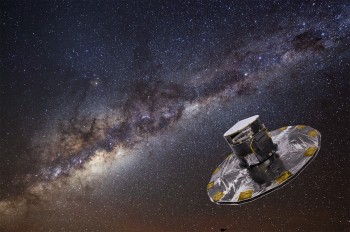 It is important to realise that for many of Gaia’s science goals, it is these relatively brighter stars and their much higher accuracy positions that are critical, and so it is good to see that they are essentially unaffected. Also, the total number of stars detected and measured will remain unchanged.

For brightness and low-resolution spectroscopic measurements made by Gaia’s photometric instruments, current indications are that the faintest stars at magnitude 20 will have been measured to roughly the 6–8% level by the end of the mission, rather than a nominal 4%, while brighter stars will remain more accurate at about 0.4%.

The radial velocity spectrometer is most affected by the stray light and about 1.5 magnitudes of sensitivity could be lost, although the number of stars that that translates into will not be known until on-going data analysis is complete.

Finally, Gaia also contains a laser interferometer called the ‘basic angle monitor’, designed to measure the angle of separation between Gaia’s two telescopes to an accuracy of 5 microarcseconds every few minutes. This is necessary in order to correct for variations in the separation angle caused by ‘normal’ thermal changes in the payload as Gaia spins. The system is working as planned, but is seeing larger-than-expected variations in the basic angle. We are currently examining these data to discover if this issue will have any impact.

A comprehensive understanding of these issues will be given when a thorough analysis of all engineering tests is complete. Gaia has nearly completed its performance verification data taking, and is about to start a month-long dedicated science observation run. Once the data have been fully analysed, we will be able to provide a detailed quantitative assessment of the scientific performance of Gaia.

While there will likely be some loss relative to Gaia’s pre-launch performance predictions, we already know that the scientific return from the mission will still be immense, revolutionising our understanding of the formation and evolution of our Milky Way galaxy and much else.