The work done to bring online all components of the Gaia service module, which houses equipment needed for the basic control and operation of the satellite, has gone very smoothly. The chemical and micro propulsion systems function well, with the latter providing tiny (micro-Newton) thrusts to maintain Gaia’s spin rate, compensating for torques due to solar radiation pressure. The phased array antenna is operating very well, ensuring that we can maintain the high data rates that are needed to downlink all the science data. And the essential rubidium atomic clock is also working to specification. 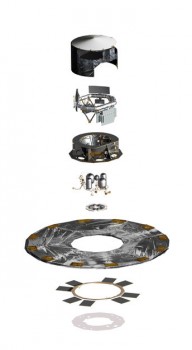 The Gaia scientific payload is also functioning very well. This includes all 106 CCD detectors and the associated electronics units, as well as the seven on-board computers that manage the CCD’s. Alignment and co-focusing of the two telescopes through their movable secondary mirrors is working as expected. Following the last displacement of one of the secondary mirrors by just 3 micrometres, we are currently at the optimal image quality that Gaia can deliver, well balanced across the large focal plane and the three instruments. This is no small achievement considering the complexity of the optics!

However, a few other aspects of the commissioning have been progressing somewhat less smoothly.

In order to deliver exquisitely precise measurements of the positions of stars on the sky, we need in turn to know where Gaia itself is in space very accurately at any given moment. The distance part of Gaia’s orbit is readily determined from radio signals sent back and forth, but the position on the plane of the sky needs ground-based telescope observations of the satellite.

It turns out that Gaia is much fainter in the sky than hoped for, at magnitude 21 rather than 18, and thus the smaller 1 metre diameter class telescopes planned to be used by Gaia’s GBOT network  are not big enough to detect Gaia in a reasonable amount of time. But by shifting the bulk of the observations to the 2.0-m Liverpool Telescope on La Palma and ESO’s 2.6-m VST on Paranal, as well as introducing Very Long Baseline Interferometry radio measurements, the problem is now under control.

Near the beginning of commissioning, a steady drop in the transmission of Gaia’s telescopes was seen, due to water-ice deposits building up on the mirrors as trapped water vapour was liberated from the satellite after launch. The transmission was fully recovered following a decontamination campaign, during which the payload was heated to remove the ice from the optics. 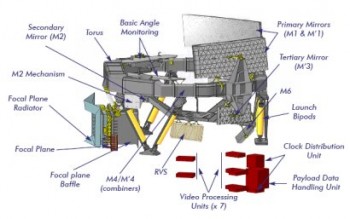 Ice deposits are thought to play a part in another concern, in which unanticipated ‘stray light’ is seen hitting parts of the Gaia focal plane. Some of the stray light is thought to come from sunlight diffracted around the edges of the sunshield and entering the telescope apertures. There also seems to be a smaller contribution from night sky sources reaching the focal plane via unexpected paths.

Although the diffracted sunlight component was foreseen, we think that it is enhanced by reflections off ice deposits on the ceiling of the ‘thermal tent’ structure surrounding the payload, allowing it to reach the focal plane. It was hoped that the decontamination campaign would also remove this ice layer, but unfortunately the stray light is still there at the moment.

Careful preparations are being made for one more attempt to remove the water ice and, hopefully, the stray light. But in parallel, we are now continuing with the nominal commissioning and a detailed performance verification phase. Even if the stray light remains, the current best assessment is that degradation in science performance will be relatively modest and mostly restricted to the faintest of Gaia’s one billion stars.

We will, of course, provide an update on the blog when we have new information to share.

Posted on behalf of the Gaia project team.