One month at L2 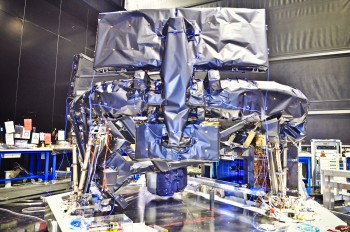 Gaia has been in its operational orbit around L2 for about a month now, where it is undergoing a very rigorous test programme before starting on its main science observations. Like many relocations, it can take some time to settle in, especially for a satellite that demands very precise and stable conditions for smooth operations.

Although we are a long way from completing the test programme or “commissioning”, we want to pass along an interim status report after one month.

We are pleased to note that all Gaia’s subsystems are working well, including the on-board atomic clock, the antenna to send the science data down to the Earth, and the micropropulsion system. The latter is an important part of maintaining the spacecraft’s current very precise and constant spin rate of 0.016656 degrees per second, or one full revolution every 6 hours and 14.23 seconds. This has allowed us to successfully enter the nominal operational scanning mode.

Very importantly, Gaia’s very large CCD focal plane detector array is also working well. You will have seen one of our first test images publicised last week as part of our ongoing work to precisely focus Gaia’s two telescopes (read the full story here). While images like this are not part of the nominal Gaia mission, they play a key role in this phase in helping us learn about the behaviour and performance of the instruments in space.

One unexpected characteristic we have noticed during commissioning concerns stray light. In our test images, an excess of diffuse illumination is sometimes seen on some of the detectors, repeating in a cycle that relates to Gaia’s spin period of 6 hours.

The primary suspect is sunlight. Gaia’s design uses a 10-m diameter sunshield to hide the sensitive payload from the light and heat of the Sun. Our current assumption is that at a few points in the spin period, some sunlight is being diffracted round the edge of the sunshield in such a way that a very small fraction is entering the satellite’s protective thermal tent before somehow managing to find its way to the focal plane. If left as is, this stray light could affect Gaia’s capability to measure fainter stars in certain modes.

However, we have a plan to try and resolve the problem. Gaia’s sunshield is currently tilted at a 45 degree angle to the Sun, but by reducing this to 42 degrees, it should be harder for diffracted sunlight to reach the focal plane, thus hopefully eliminating the stray light.

We are now working towards reducing the tilt angle, but it will take several weeks to implement and test. Clearly, we cannot just change the orientation of the spacecraft overnight: we first must ensure that its attitude control system is reconfigured to cope with this without generating false software alarms. We also need to prepare and validate a revised scanning law that will enable Gaia to carry out its scientific job of fully surveying the heavens.

This work is currently ongoing, along a myriad of other tests and checks of the spacecraft. But this is exactly what the planned several-month long commissioning phase is for: identifying and solving any issues to make sure the spacecraft is ready to conduct science with a clean bill of health.

We will update you when we have any new developments to report.