From Cayenne to Orly and back, seat 3A was for the transponders.

Of course you have all noted that when we started our blog the launch date of Gaia was 20th November and now the countdown to launch shows 20th December. Why is that? Let’s start from the beginning.

On Saturday, 19th October, at about 16:30 when I was shutting down the computer in my office in Kourou and preparing for a sunny Sunday, I received a phone call from the person responsible for one of the key systems embarked on the spacecraft. There had been a failure on a satellite already in orbit and the analysis of the failure pointed towards a design mistake. The consequence was that the lifetime of a tiny and innocent transistor was at stake. In fact the poor components failed on the flying spacecraft not long after launch. After a careful check it was clear that a similar design was implemented on the two Gaia transponders and the risk of them failing before the end of the mission was not negligible. 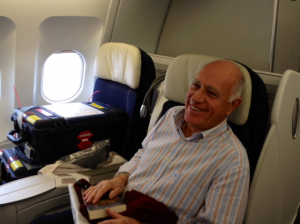 The special transporter Mr Mario with the two transponders on the return flight.

Now, the transponder is a unit that a spacecraft uses to communicate with Earth, therefore it is better that it doesn’t fail. Of course we have two transponders on board, but would you launch something if it is probably sick? Saturday evening was spent to discuss the options with various engineers in Kourou and Europe. Information was collected and people were given the night to think, in time for a multilateral telecom which was held on Sunday. This was a much less sunny Sunday than I had hoped. The evidence was pointing towards a risk that we decided not to run, and the decision was quickly taken to remove the two units from the spacecraft as soon as possible and to send them back to Europe for retrofit (which is a nice word to say repair).

I will not go into the detail of the last three weeks, which were at least “challenging”… The important fact is that the work was done thanks to a huge effort of all participants and the two transponders are back in the clean room of the launch centre. They are being integrated right now.

In case you are interested to learn a little more about the curious journey these transponders made… In a schedule very tight it is of utmost importance not to waste precious time in the transport of the hardware or worst, to have it lost in some airport or wrong flight. In order to avoid any risk and to have the quickest transport possible, it was decided that the two electronic units would fly in their black boxes as cabin luggage with a dedicated escort. Luckily the two boxes are not that large and they could share the same business seat on the Air France flight. There was however an additional complication: we did not want to pass the delicate electronics board through an X-ray check, neither did we want the containers to be opened for inspection at customs. Therefore, support from Air France and local police at the airport was necessary to pass the various steps of legal and security formalities without putting the safety and cleanliness of the hardware at risk. To achieve that was also a project in itself, perfectly managed by CNES, Arianespace and Astrium. It was certainly a funny experience to meet the two transponders in the business lounge of the Cayenne airport escorted by Mario (the end-to-end responsible of the trip), the head of the airport ground facility and a police agent. No champagne was served to the transponders.