Is there a doctor on Mars?

Update 10 February: Watch a video of the telesurgery from Kai Staats, Mars134 crewmember via space.com 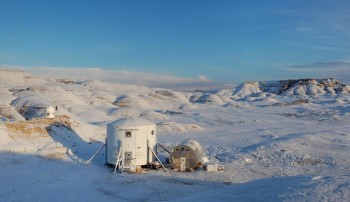 It sounds like something from a science-fiction survival-film: a colleague on a Martian outpost breaks a leg during a mission far from base. Brought back safely to base, the colleague is unconscious and losing blood. To make matters worse the patient is the only person who is qualified to provide aid for this type of emergency.

The MarsCrew134 Analogue Astronaut Expedition is simulating a mission to Mars over the course of two weeks at Mars Desert Research Station in the Utah desert, USA. Susan Ip Jewell, MarsCrew134 Medical Officer and Executive Office and member of the International Space Surgery Consortium is leading an experiment to play out the survival scenario. A realistic dummy used in hospitals acted as the Marsonaut in need of aid while two crewmembers of MarsCrew134 got ready to perform emergency first aid with minimal prior training. 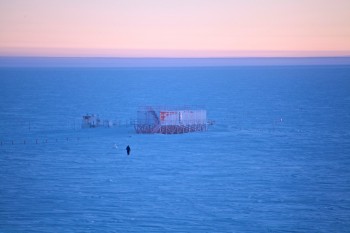 To help and guide the MarsCrew134 team they called for help: doctors on ‘Earth’ – Matthieu Komorowski in Lille, France (medical officer of Crew133) – and ‘Mars’ – the Concordia team in Antarctica – joined the operation remotely. The International Space Surgery Consortium provided off-line support. The goal of this experiment is to see whether minimally trained crew personnel can perform anaesthesia and even an operation .

Concordia doctors were involved in this experiment to simulate two human outposts on Mars. Signals between Earth and Mars take up to 13 minutes so if a Marsonaut asked

Earth a question such as “The patient has stopped breathing what should I do?” a reply would not come back for over 25 minutes. Obviously in a life-threatening situation a more speedy answer is preferable, so a Mars base could ask for help from an ally closer to home.

The two research bases involved in this experiment were assigned temporary locations on Mars. Mars134 was located at Mawrth Vallis and Concordia was placed at II Thyle I near the Martian South Pole. 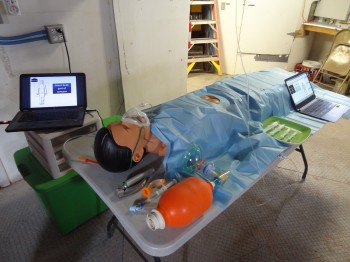 The patient has arrived at the Martian base and is in a critical state. Software simulates the patient’s vital signs based on real-life data. The prospects do not look good: the patient lost one litre of blood and is in shock. In this case it is vital to anesthetise and treat the wound. Blood pressure is 57/38, heart rate: 127, respiration: 24/min, saturation 94%.

The MarsCrew134 team on hand for the operation, Susan Jewell and Vibha Srivastava, followed the materials checklist under Matthieu’s supervision: Suction, Oxygen, Airway, Drugs, IV, Monitor, all confirmed in working order and ready.

Once the IV was in place Matthieu instructed the fluid to be administered at the highest setting. Oxygen was given through a face mask. Matthieu described getting the intubation tube into place with Concordia stepping in to give advice. The procedure was delayed by a tube getting lost in the hectic action. Matthieu instructed the MarsCrew134 team to use another tube.

The crew got the job done with that small hiccup and the patient survived. Drugs administered brought the patient back to consciousness and the eyes opened and responded to basic orders such as squeezing hands. The patient was anesthetised and conscious!

To treat the wound, Concordia base doctors Tindari Ceraolo and Adrianos Golemis took over, leading their colleagues on Mars. The two sites were using satellite internet for the telesurgery-anesthesia and video was blurry and unreliable. To get the job done in these difficult circumstances, Susan described in detail what they were seeing and doing.

ESA-sponsored medical doctor in Antarctica Adrianos Golemis instructed Susan to clean the wound while Matthieu monitored the vital signs from France. From needle size to insertion angle, Adrianos directed the MarsCrew134 how to sterilize, clean and sew up the wound and protect it with gauze.

The operation was over in less than an hour and most importantly the patient survived to see another Martian sunrise. 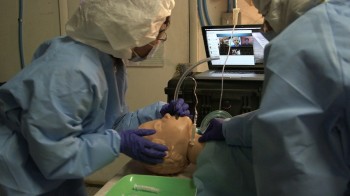 Vibha had been helping Susan throughout the procedure onsite at the MarsCrew134 habitat, as a crew scientist without a medical background she found it hard to follow some of the technical instructions such as ‘auscultate chest’. Future experiments might benefit from labelling equipment to find what is needed quicker. Reaching for tools was a struggle and coordination was difficult. Without prior training these things are probably unavoidable.

Susan remarked during the debriefing: “Finding the challenges and working out how to solve them in the future is what all this is about”.

The MarsCrew134 team have two days to complete their mission, the Concordia crew will stay on their base in isolation for another nine months at least.