Alex writes: Although days have become longer with the return of the Sun, our days have also become busier with the imminent arrival of our first plane after nearly 9 months of living here alone as a team of 13. We have been feverishly cleaning the base and preparing the 2km long snow runway.

My research finished this week, which whilst being a relief also has created new jobs. I have to clean my lab for the next Research MD and pack equipment, samples and results to send back to civilisation for processing. Not everyone chose to take part, the research is voluntary and some people simply don’t have time or choose not to participate. I managed to keep everyone who started at the beginning of the year, which during the winter period is particularly challenging. Some members of the team began to fatigue and tire, and so too did their enthusiasm. I am looking forward to seeing the results.

For each of us it has been a long, eventful and hard year in different ways. I am sure some of us will remain in contact for the rest of our lives and already have made plans to meet up in the future. But right now our immediate post-Concordia plans take priority and are filling our imaginations – mainly involving travel to far-flung, warmer climates and eventually homeward bound.

Some team members made wooden sign posts, each stating the distance to their home town, and we put them up not far from the base – featured in the picture are colleagues Sebastien Aubin (French glaciologist) and Bruno Limouzy (French station mechanic). It is 16,547 km to my home town, Whaley Bridge, in rural England. And what a voyage home awaits me! But I will be home for Christmas.

I will not be leaving first among our winter-over group members, but had asked to leave as early as possible, having been honoured to be considered a second winter on the ice, as team member for Sir Ranulph Fiennes transantarctic journey. I settled instead for a home team place, helping to organise human science research, White Mars, for this epic and historic undertaking. This leaves next year free for my own planning with friends and family – there is much to finish and much to start. However, I am exceedingly grateful for my early departure – which is well planned since I will be returning to the Antarctic ice, at the end of December to feature in a television documentary. Long after that, I should be in Central Southern Africa teaching and continuing other research, furthering my growing interest in physiology and tropical medicine.

I have been approached by several groups in different countries who would like me to exhibit my photos from the past 10 years travelling and I hope I can pursue that as a new hobby. Even on the way home I will be giving several lectures. With plans afoot to spend a couple of weeks with my partner in New Zealand also – no doubt time will fly by.

It will be strange to be able to breathe freely again, to smell and taste and hear new things. I have only seen 12 other people for the better part of a year. How utterly disconcerting it will be to stand in Piccadilly Circus in London on a busy street corner with hundreds of people flying by.

I guess the hardest part for me this year, alongside being the only English national on the base was having to do two jobs – both as Research MD and Station medical doctor. This was the first time this has happened here and I hope it will be the last- there is normally a separate station doctor.

In the latter role, it wasn’t always quiet on the Southern front, with several medical events and illnesses to deal with. Although feeling a little tired and having battled through some desperate times, I am energised for my next adventures, research and returning to clinical medicine, in warmer climates. This is the longest medical oncall I have ever done – 9 months in total – never again will I moan about a week of night shifts in Anaesthetics or Emergency Medicine back in Oxford.

I only wish the job role had been for me as easy and as well-defined as it was for my predecessors- this year I was not as lucky as my predecessors in this respect. Still, having adhered to this year’s team motto, as a young 28 year old doctor, I took on and fulfilled this role, and in the spirit of my hero Dr Edward Wilson (first doctor to reach the South Pole and similarly aged on his first expedition to Antarctica) I “kept calm and carried on” regardless and tried to keep up my sense of humour throughout. Everyone is still standing now – my main aim for my medical role – where people have acknowledged the very difficult role. Though I am still smiling, I am not sure how.

In reflecting on my year here, I started thinking about what I have missed the most this year and have dwindled the list down to: the sound and feeling of rain on my face (as any Englishman), the smell of cut grass, a cold glass of fresh milk and more than anything a hot bath.

People say that being marooned in the Antarctic winter is like living in a ‘goldfish bowl’ – their point being that you only have your own restricted view on the inside and in that may find it difficult to make balanced decisions. They may have a point. But in fact unless you swim around down here during the Antarctic winter, only then do you realise you can see outside also and have a heightened view and easier ability to see a larger and wider picture, elegantly exacerbated by the curved glass. Concordia has, in removing me from civilisation where sometimes it is harder to step back, enabled me to see the bigger picture, provide a unique experience and reminded me of somethings, setting a course and direction for the future. Now there are many more opportunities and plans afoot but these have to remain a secret for the time-being. With a huge expedition planned in the distant future and a return to the Arctic planned too – a place I consider to be a second home.

I think once you come to Antarctica, drawn to it under a spell like a seaman to a mermaid, you never can break the link you form with this raw, rugged and ruthlessly beautiful and enticing continent. I look forward to taking her on, in 2014 I will cross Antarctica on foot, and in doing so our team of 6 will complete Shackleton’s planned route in its entirety for the first time, 100 years on since his lucky great escape from the clutches of this unforgiving continent. This continent is a place of dreams and nightmares and furthermore I have found wintering to have been one of the greatest journeys in the world, a 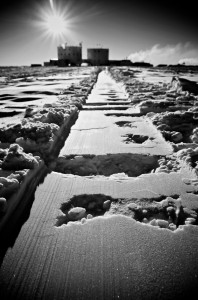 psychological marathon. One can never understand or know the Antarctic winter, until you see it, live it and experience the best and worst it has to offer. Simply speaking, using Charles Dickens words, this year has been ‘the best of times and the worst of times’.

Less than a month now before I leave the ice… in the meantime, I have a room to clear out, a lab to pack up, a few postcards to send, a family to get home to and a naughty mischievous husky puppy to run up in Scotland on my return – a promise I made a year ago. I am exceedingly grateful for the opportunity I had to come down here and experience life at this extreme and more so, will be exceedingly privileged to be able to share it, alongside other adventures, with schools, societies and exhibitions, inspiring the next generation of hivernauts, explorers and scientists.