Becoming the station’s doctor and dentist 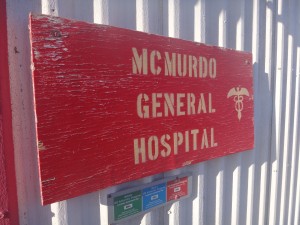 Alex writes: I have been here for around three months already and it has been hectic. The original Italian station medical doctor had to return home. I was offered the position as the station’s medical doctor – it was the most difficult decision of my life, but a natural one. I felt extremely well supported – the British Antarctic Survey’s Medical Unit – led by Doctor Anne Hicks and Peter Marquis – offered me full telemedicine support alongside that already in place by the French and Italian Antarctica Medical Units. 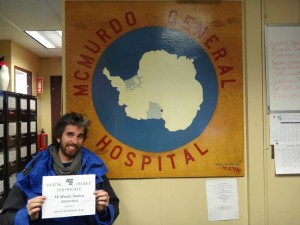 I had no dental training, so was grateful for being kindly assisted by the National Science Foundation and the United States Antarctic Program, to travel to the American Station of McMurdo, where I was allowed to join the dentist on site, Dr Kressley Gunn. I learnt important skills in dentistry for one week, before returning to my home station, Concordia ready for the winter isolation.

Over two months after being left in isolation here, I have only just started to settle into a routine. Due to the cold and altitude there is very little oxygen in the air. We live in a permanent state of hypoxia, or lack of oxygen to the brain in layman’s terms. This means we quickly get out of breath quickly and normal everyday tasks can become quite a challenge. We have a gym where I manage to run 2 kilometres in 15 minutes, at a leisurely hypoxic pace. You have to be careful and concentrate on running in a straight line on the treadmill…