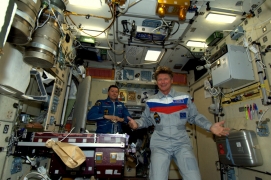 There are six of us again on the Space Station. Two weeks ago the Soyuz TMA-04M arrived with Gennady Padalka, Sergei Revin and  Joe Acaba. It was a special moment. We listened to Russian flight control communicate with the new crew on the radio. I felt the spacecraft dock with a bump. After the necessary safety checks we opened the hatch and ISS crew was back to full strength: six people.

I flew with Gennady Padalka in 2004. As this is his fourth long spaceflight he felt at home straight away and is very cheerful. It is Sergei’s first time in space however. He looks around a lot and is absorbing the new experience while moving around calmly. Joe was

eager to learn immediately. Don and I have to introduce him to the Space Station. For example, he watches when I exercise on the bicycle. He also watches when we do maintenance work such as moving sensors that measure radioactivity or working with scientific racks. I feel like a veteran sometimes. Almost five months ago I received the same introduction from Dan Burbank. Now I am the one that is passing on the knowledge and explaining how everything works. Then it will be Joe’s turn to make the ISS his home. Each crew member has their own way of making themselves comfortable.

Don, Anatoly and I are the ‘bald crew’. The new Expedition members have told us that they will not cut their hair during their mission. That makes them the ‘hairy crew’. New arrivals always make mistakes using the toilet or when washing. Sometimes one forgets to turn on the suction or to brace themselves. Luckily we all laugh when it happens. We have all done it once…

Reaction times
Last weekend, just as every weekend, I did a ‘reaction self-test’. This is a test on a computer that measures reaction times. A blue block is displayed on the screen. A clock appears that measures milliseconds. When the clock appears you have to press the spacebar as quickly as possible. You never know when the clock will appear. By measuring my reaction time scientists on Earth can record how ‘alert’ I am. This differs greatly. Sometimes I must measure my times in the evening, sometimes

when I wake up. Sometimes I am very busy and my thoughts go to an experiment that I am conducting. A noticeably longer reaction time is the result.


I am trying to create as many pleasurable moments as I can during the last weeks of my mission. It is amazing how time flies up here. I have only managed to fully enjoy the view from the Cupola observatory a couple of times. I leave my camera and float in the Cupola so that Earth is below me and next to me instead of above me. It is very special. I recently saw the whole of Europe in one go, simply by looking around, from Ireland to Cairo and from Norway to Morocco. These moments are magical. They will probably be the most memorable moments of my mission…