Bye bye Dan, Anton and Anatoli. See your on Earth

Yesterday Dan, Anton and Anatoli left. We worked all night. I drew blood from Don and myself and collected saliva samples to be sent back on the the Soyuz to the scientists on Earth. Around six o’clock in the morning Western European time we said our goodbyes. At ten to seven we closed the hatch to their Soyuz. At exactly 10:18:30 they detached from the ISS to travel back to Earth. I heard the latches release and felt a small shock when springs pushed the Soyuz away. A little later I saw the Soyuz descend on its way to to a safe landing in the Kazakh Steppe, a little before two o’clock in the afternoon.

The next three weeks I will be on board with colleagues Don Pettit and Oleg Kononenko. It will be different. Quieter in our free time as we will have more room and not float into each other so quickly but busier during the day as maintenance work and experiments continue as usual. In addition a cargo ship will arrive. Unpacking ATV, Progress

and Dragon takes a lot of time, in addition we need to search for equipment to fill the cargo ships once they are unpacked.

Last Friday and Saturday we ate together. We celebrated Don’s birthday with live guitar music. Dan can play very well. Wednesday was the official handover ceremony. Dan passed command to Oleg. I felt as if Expedition 31 had really begun when the Soyuz hatch closed this morning. A farewell to the crew is not an emotional affair. Of course we will miss the company and good times on board. Just as we will miss Dan’s expertise and knowledge, he is a fantastic commander. 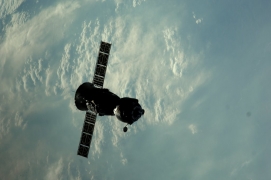 But we will see each other again in a few months back on Earth.

Of course I do think about it: the next person to crawl into a Soyuz will be me. I will sit in the left seat, the first to climb in and the last to crawl out. We will follow the same procedures as the men who just left. We will undock and the flight home will be short. One moment we will be floating high above Earth and in less four hours we will be on ground. I remember from last time that it feels like a wild amusement park ride. We will feel four times heavier and once the parachute opens we will be shaken about so much that we will see twenty screens instead of two. It is the most spectacular part of my mission, more so than the launch. The last shock will be the rockets under the Soyuz providing extra braking power. Even they cannot avoid the capsule hitting Earth with the force of a small car crash. It sometimes falls over and can even roll a few times. Altogether it is not the most enjoyable part

of the mission. Especially if you imagine that our bodies have not been exposed to gravity for half a year. I will be weak and tired and sick. But I will be smiling, as it is all part of the job.

It is a little strange thinking that I will be going home. I still have over two months up here. I have many tasks to do. I am looking forward to docking the Dragon cargo ship as well as welcoming the new crew in three weeks time and conducting many more scientific experiments. As you can see, life in space is not much different from life on Earth. You stop to think of the future… until reality calls you back.