Sport, experiments and somersaults for TV 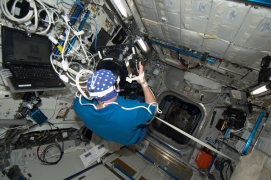 Every day on board the ISS I change into several different clothes. Back home on Earth most people have a logical schedule. You go to work, go shopping in the weekend, visit friends or go to a sport club. In space things happen differently. Our schedule tells us what to do down to the last minute. Thankfully there is some breathing space, but some events need to be done on time due to the satellite connections with ground control. The activities we do can be quite varied. One moment I am on the exercise bike, half an hour later I could be doing a live event with the American media. In between I might grab a quick lunch, after the live event, another hour of exercise, and then back to the experiments. Sometimes it is not worth changing clothes in between our different activities, so we end up floating around on television in our exercise clothes.

I have already conducted many scientific experiments for European researchers. Vessel Imaging for example: an ultrasound is used to observe changes in my blood vessels. Or Neurospat: this experiment records my brain activity in space. Every day I fill in questionnaires, in order to monitor headaches in space. The questions are about what I eat or if I notice changes in my field of vision. I also followed a strict diet for five days. I was not allowed any snacks and only ate what I was told to. Scientists will be able to further improve the diets of astronauts based on the results of this study. To test our alertness we conduct a reaction test every four days before going to sleep. All these experiments give scientists a better understanding of how the human body reacts to weightlessness. This is good information to have when on longer space trips in the future. Back on Earth scientists can use the same data to improve therapies and medical instruments.

Russian Christmas
Last week we celebrated Russian Christmas. These sort of celebrations are always extra special in the ISS. We all retrieve our favourite food from the cupboards. I bought my cheese that had arrived earlier on a cargo ship. In addition we had a feast of Russian and American snacks.

We knew that the astronaut band Bandella was playing in Houston on that day. As we could not be present at the concert we played their music in the Space Station. The atmosphere was great.


I get on very well with my five colleagues. Each astronaut has his own rhythm. Don Pettit goes to bed early and gets up early. The Russians work late and even do their exercise afterwards. I try to sleep as long as possible in the morning. My schedule is fully booked and it is important for me to get enough sleep. So far I have not had much luck. There is simply so much to do. A few nights a week we arrange to eat together. If we didn’t we would hardly see each other due to our busy schedules. When we eat together I am reminded of camping back on Earth. Although on a camping ground you can enjoy a warm shower, unfortunately we do not have a warm shower here…

Contact with the media
My family told me that the contact I had with the Dutch media NOS/RTL and the Prime Minister of The Netherlands, Mark Rutte, at the Technical University of Delft was well received. 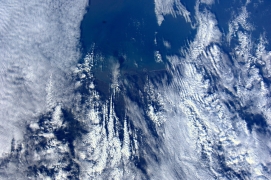 The event at the TU Delft was special, because I was present at a similar event in 2009 when Frank de Winne was in the ISS. This time the roles were reversed. In the Space Station I do not get a clear impression of the events although I can hear the applause and laughter… I look at the camera and tell people what it is like to live on the ISS. I do my best to show the weightlessness in space, for example by doing a somersault. When Houston tells me the event is finished, I continue with the next item on my agenda. The activities follow in at a fast pace.