Part one of this science blog is available here

I was very happy to turn on the Electromagnetic Levitator on Wednesday. This machine is a furnace that melts and solidifies metals with a twist. Using magnets it can suspend a metal sample in a vacuum, heat it to 2100°C and cool it rapidly without the sample ever touching the sides of the wall. Although this sounds really hot (or cool) the machine is mainly a box that accepts cartridges to process. The whole process is automatic after we put the cartridges in, leaving us to work on other things. I have a special connection to this experiment as it was built in Germany and I spent many hours assembling it, whereby we overcame several hurdles. Most critical of all was a bolt that was supposed to lock and protect the hardware during its launch on the European Ariane rocket aboard ESA’s ATV-5. To install the experiment I needed to remove the bolt on orbit – but it was stuck. And even worse, it was stuck in a very inaccessible place, blocking assembly of the experiment. At first it looked like the experiment might fail, but the team of dedicated engineers on the ground and myself up here used a creative solution to fix the problem. In the end, I sawed off the stuck bolt with a hacksaw blade and shaving cream to stop metal shavings to float into the delicate optics of the machine. It was an operation that has never been done on orbit this way, but we succeeded. This is a fine example for what human spaceflight can achieve – had this experiment been launched on a satellite it would have failed. Needless to say, I was thrilled by our success.

Right now this fantastic machine is doing its first test-runs. Samantha Cristoforetti will take over after I leave and continue feeding it with samples.

The electromagnetic levitator is a continuation of many experiments into metals in space. You might not have realised but we are well into a new space metal-age. Your smartphone probably has metal alloys that developed from research on the Space Shuttle in the 1980s. A few years down the road, some of the metal alloys we process in the Electromagnetic Levitator might be saving fuel in the next generation of aircraft turbines. 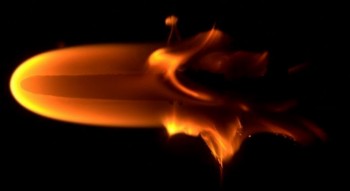 A more visually dramatic experiment I worked on was NASA’s BASS experiment – Burning And Suppression of Solids. Basically I burnt 100 samples in ESA’s contained glovebox and extinguished them. This experiment helps understand how fires spread in space – this happened on the Mir space station in 1997 – but also how flames behave on Earth leading to safer materials and quicker fire detection.

We have also been growing crystals in space for the Japanese space agency JAXA. Using a furnace in their Kibo module we have been getting Silicon and Germanium to crystalise in weightlessness. Once researchers know more about growing these crystals they plan to apply the technology to create the next generation of solar cells and computer chips. 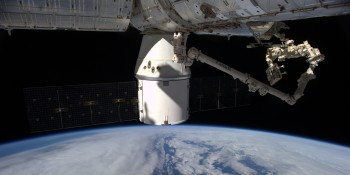 The International Space Station is also a great platform to launch miniature satellites or install new modules to observe our planet. In October we installed the NASA satellite-replacement Rapidscat on ESA’s Columbus laboratory using the Canadian-built robotic arm. Rapidscat replaces a stand-alone satellite called QuikScat that proved to be essential for predicting weather. When it stopped working NASA sought to replace it quickly using the Space Station as ready-to-use platform. The module measures the surface of our oceans, wind speed and direction and gives early warnings for hurricanes.

NASA’s B-CAT experiment is laying the foundations for using nanotechnology and will most probably increase the shelf-life of food you find in supermarkets while making food cheaper to manufacture. For this experiment we took images of colloids in space and returned them to the research teams on Earth. A colloid is the name scientists give to microscopic particles that are naturally suspended in a liquid or gas. Examples of colloids can be found everywhere from a glass of milk to shampoo. On Earth gravity is always pulling at the particles in a colloid, getting in the way of scientific observations, which is why we mixed up some colloids while orbiting Earth.

In the 19th century Italian physicist Carlo Marangoni was investigating why water and other liquids stick together slightly, a phenomena called surface tension. Surface tension is what allows some insects to walk on water, makes balls of mercury balls stick together and explains why cars have a droplets of water sticking to them after a car wash. Mr Marangoni wrote about a process now called Marangoni convection that we are investigating 150 years later in more detail for a Japanese experiment in space – how cool is that? The results from this experiment will provide fundamental constants that are needed for many industrial processes. We made liquid bridges to investigate how temperatures change. The bridges are 5 cm in diameter and up to a few cm long. On Earth, gravity would pull the liquid bridges apart immediately, so we can only do this research in space.

The phenomenon behind those amazing aurora pictures I hope you have seen are particles from space hitting Earth’s magnetic field. I have not only been taking pictures of this striking interaction with the magnetic field. We are investigating the influence of our planet’s electromagnetic forces on electronics on the Space Station. This research is important as our magnetic field protects us from cosmic rays that can crash computers and even aircraft. As aircraft and humans fly higher and higher (not to mention satellites) the electronics used are more susceptible to hardware failure from these cosmic rays. The auroras are just a beautiful bonus. 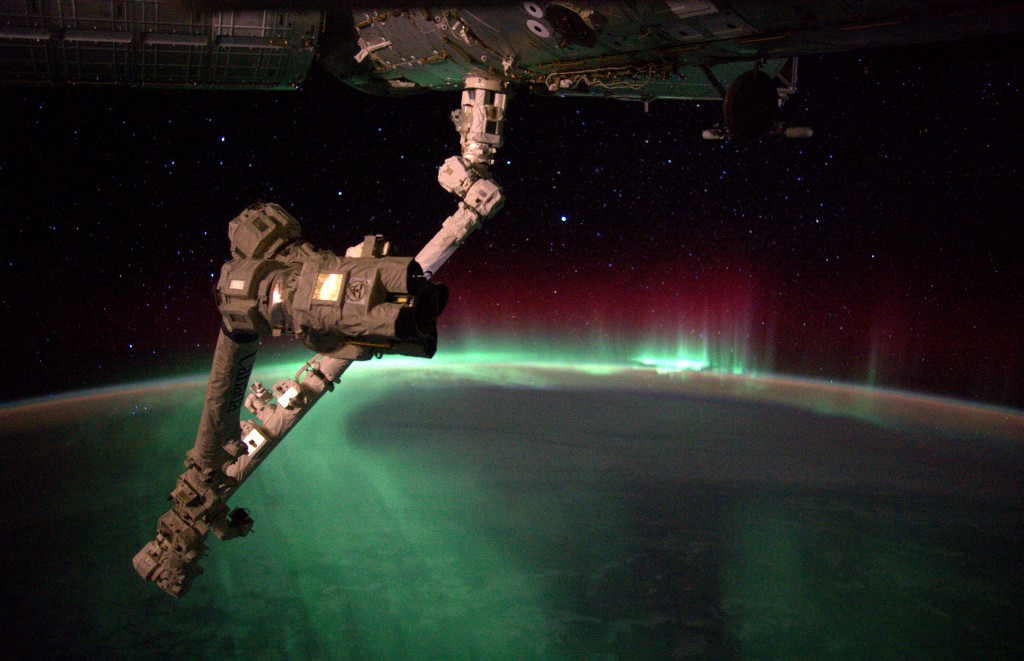