As if I had never left

We, the crew of Soyuz MS 09, arrived safely on the ISS, started our research – and it feels fantastic to be back up here!

The launch with the Soyuz rocket was bombastic, but relatively relaxed nonetheless. What sounds like a contradiction has a very simple reason: because this time, I knew what to expect.

The atmosphere on board was fantastic, thanks to my crew mates Sergey and Serena. This showed, for example, as we sat in the narrow cockpit, waiting for pressure tests to be conducted ahead of our flight. Earlier, each crew member had been given the chance to request a few pieces of music to be played over the radio during the pressure tests. Serena’s list included Michael Jackson’s “Billy Jean”, and when it was played, we all started dancing with our hands for fun. We thought we were unobserved, but at that very moment, mission control turned on our cockpit camera! I’m sure that caused a few spontaneous laughs in the control centre, not to mention all the viewers watching the live stream. The show was not planned, but it does illustrate an important point in our profession: one should always retain a sense of humour. There are enough serious moments.

ESA astronaut Alexander Alexander waves farewell to family and friends as he departs the Cosmonaut Hotel to suit-up for the Soyuz launch. Credits: ESA–S. Corvaja.

Things also went almost too smoothly during our flight to the space station. Unlike in training, there was not a single moment during the real flight when Sergey and I had to test our limits as pilots and co-pilots. What is absolutely desirable, of course, appeared unusually quiet to us. Unlike the first mission, I had completed the full training programme to be able to control the Soyuz myself. And that was a great feeling: knowing that I really have this under control. I could fly a spaceship with my own hands if necessary, and not just in the simulator.

Even in automatic mode you have to control the spaceship with countless inputs on the console. However, compared to the simulator, in the real spaceship you typically always check two or three times whether you are actually entering the right commands. Pressing just two wrong buttons would be enough to blow the spaceship in three parts or depressurize it immediately, without an “are you really sure?”. This sounds dangerous, and it is, but in some situations, such as an emergency re-entry or fire, we have to do just that in a flash to save the life of the crew.

By the way, our training under a steady bombardment of malfunctions was not completely useless. During our approach to the ISS, shortly before a thrust maneuver, an alarm signal indicated that one of our engines had failed. However, thanks to the safe design of the Soyuz capsule, this was no problem: we simply switched over to the spare engine for the next thrust. And, in the end, it actually turned out that our thrusters were all fine, only a sensor had triggered incorrectly.

It is in these moments when our training really pays off. You have to be constantly alert, constantly acting, even if the spaceship often flies automatically. The most experienced cosmonauts rightly say you have to “fly ahead” of the spaceship in your mind, ready to manually take over at any moment.

The two days of living in the tiny Soyuz were long, but contrary to my expectations I slept relatively well. Once I slept for eight hours and in the next “night” I slept almost eleven hours – what a luxury compared to the previous months. And luckily, like on my first mission, I didn’t get sick, even though the capsule is in a spin during most of the approach to . After these two rather calm days I was completely relaxed when we arrived on ISS, having had the time to eat, go to the toilet and get used to life in space.

When the hatch opened to the station, it felt like coming home to me. I immediately got along as well with floating as a fish does with water. Interestingly, my feet and hands have even unconsciously remembered where handrails and foot loops are, and usually, when I flew around a corner, they grasped the correct handrail on their own. But there was one time it didn’t work out so well. My body thought it knew exactly where a handle had to be and reached out to grab it – only to find someone had moved it since my last mission…

I still don’t know exactly why, but my body appears to have been created specifically for such strange environments. Just as I always felt very comfortable under water as a child, in free fall while skydiving, or in the cold of Antarctica, for some strange reason it feels completely natural for me to float around here in space.

During my first mission, the biggest challenge of my first few weeks was re-familiarising myself with the many complex computer systems and pieces of equipment on ISS. But now even that feels as if I never left, which is lucky as we had to start preparing difficult scientific experiments straight away. Serena and I also had a complicated onboard assignment to support two NASA colleagues during their spacewalk, right in our first week on board. 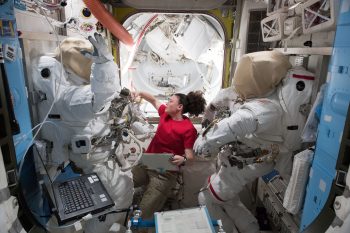 Serena checking the spacesuit tools the day before the spacewalk. Credits: NASA

For that assignment, we manually had to maneuver the massive ISS robotic arm, and also we had to help our colleagues Drew and Ricky into their spacesuits, performing the final check before they would leave the relative safety of ISS in order to work outside in open space. When putting on helmets, shoes and gloves, every little mistake can be fatal, since the environment in open space is not exactly life-friendly. Like a shepherd in a stormy night, I only relaxed again once my two colleagues were safely back inside.

I am very much looking forward to the months ahead in this fantastic laboratory, with hundreds of unique scientific experiments that will make life on Earth better. Thanks to my experience I can now help my new colleagues settle in up here. But the learning phase is not over for me either. Because when you work inside the most complex machine of humankind, there is always something new to learn.

And that’s a good thing.